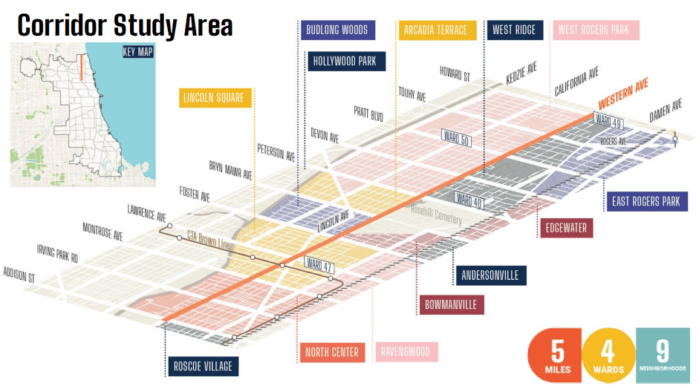 The Chicago Plan Commission has adopted the Western Avenue Corridor Study, looking at land use, development patterns, and population growth along a northern 5-mile stretch of Western Ave.

The final zone is the commercial transition zone, which would be predominantly commercial uses with some potential for residential or office above. This lower density model would suggest an FAR of 2-3 and a B3-2 zoning.

A key finding was that due to population growth, there is increasing demand for a range of housing types in the city – including apartments, condominiums, and single-family homes – and a need for various affordability levels.

Feedback from residents indicated they want to see more housing along Western. As a result, the report recommends increased density and high foot traffic in strategic mixed-use neighborhood centers, with lower density housing infill in between centers. Buildings would be setback along narrow sidewalks and a toolkit has been prepared for activating underutilized storefronts.

DPD developed a Renovation and Development Toolkit to go along with the study’s materials. To be used in addition to typically required zoning standards, the toolkit supplies inspiration and identifies best practices for the corridor.

Next steps include identifying and allocating resources for projects based on study recommendations.