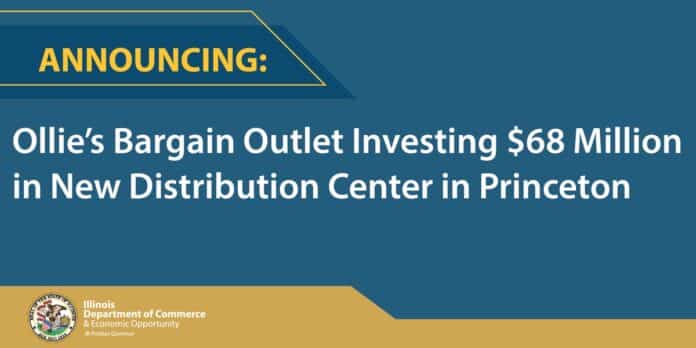 Ollie’s Bargain Outlet has released a plan to build a new $68 million distribution center in Princeton, part of a nationwide expansion.

The 600,000 sq. ft. center, expected to be completed in 2024, received an Economic Development for a Growing Economy (EDGE) tax credit.

“We are excited to make the next key step in our nationwide expansion happen by building our fourth distribution center in Princeton, IL,” said Eric van der Valk, executive vice-president and CEO.

“Illinois is one of Ollie’s fastest growing states with ten stores and counting to open in the upcoming months. Its central location to our other markets in the Midwest region and the strong workforce made Illinois the perfect spot for breaking ground.”

The company received an Economic Development for a Growing Economy (EDGE) tax credit to build the new center.

“I’m excited to welcome Ollie’s first distribution center to Illinois and to the Midwest, and proud that this facility will create full-time jobs and support the local economy,” said Governor JB Pritzker. “Illinois’ top-notch location and infrastructure are well-suited to support the needs of a fast-expanding company like Ollie’s.”

“When Ollie’s contacted us about finding a Midwest location, we showed them sites throughout Illinois that reach the entire region efficiently,” added Intersect Illinois CEO Dan Seals. “In the end, Princeton’s location and strong talent pipeline made it the best choice for their growth.”

Chicago issues $200 million RFP for renewable energy supplier for all...