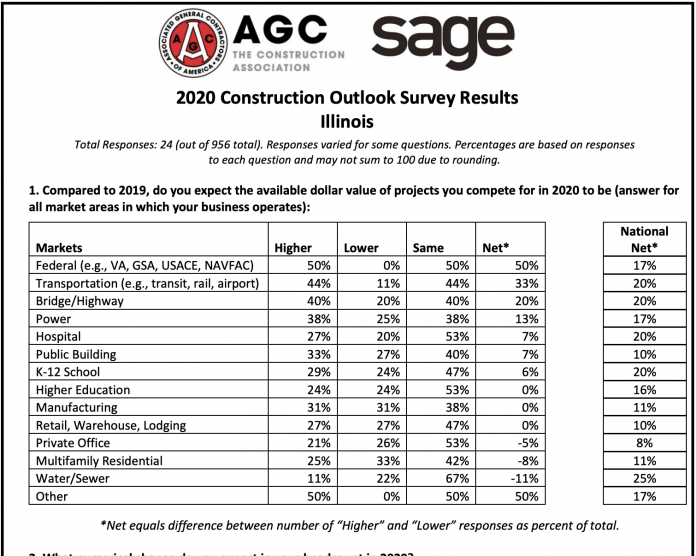 Contractors in Illinois are reporting less problems in finding salaried and hourly craft positions than the national average, but a significant percentage of contractors are experiencing hiring difficulties, according to an  Associated General Contractors (AGC) of America survey.

Some 58 percent of contractors report they are experiencing difficulties in “filling some or all positions. In contract, the national data indicates challenges for upwards of 75 to 80 per cent of contractors, who expect labor-force demand to expand in every market segment in 2020 despite signs of a slowing economy. Surveyed contractors say they plan to increase compensation and adopt productivity-boosting technologies to cope with worker shortages.

“Contractors are very optimistic about demand for construction in 2020,” said Stephen E. Sandherr, the AGC’s chief executive officer. “At the same time, many construction executives are troubled by labor shortages and the impacts those shortages are having on operations, training and safety programs, and bottom lines.”

Nationally, the percentage of respondents who expect a market segment to expand exceeds the percentage who expect it to contract for all 13 categories of projects included in the survey. For every segment, between 27 and 36 percent of respondents expect an increase compared to 2019 in the dollar value of projects they compete for. Meanwhile, between 11 and 21 percent of respondents foresee less work available in 2020. The difference between the positive and negative responses – the net reading – was between 8 and 25 percent for every category.

Despite firms’ plans to expand headcount, 81 percent report they are having a hard time filling salaried and hourly craft positions. That share is up slightly from 78 percent at the start of 2019. In addition, 43 percent expect it will continue to be hard to hire in the next 12 months and 22 percent expect that it will become harder to hire in 2020.

Labor shortages are having an impact on construction costs and project schedules, association officials noted. Forty-four percent of respondents report that staffing challenges drove costs higher than anticipated. In reaction, 41 percent of firms are putting higher prices into new bids and contracts. Similarly, 40 percent report projects have taken longer than they anticipated and 23 percent report putting longer completion times into their bids or contracts.

Firms continue to raise pay and provide bonuses and benefits in response to labor shortages. Fifty-four percent of firms report they increased base pay rates more in 2019 than in 2018. Twenty-three percent provided incentives and/or bonuses. Fourteen percent of firms increased contributions or improved employee benefits to cope with workforce shortages.

“Firms are adopting a variety of approaches to replace workers or allow for use of workers with less experience or training than before,” said Ken Simonson, the association’s chief economist. He noted that 32 percent of respondents report their firms are investing in labor-saving equipment, including drones, robots and 3-D printers. Twenty-eight percent of respondents are using methods to reduce onsite worktime, including lean construction, building information modeling or offsite pre-fabrication.

“We’re seeing an increasing number of firms embrace technology, especially mobile technologies in the field, as a way to help increase efficiencies and achieve business objectives,” said Dustin Anderson, vice-president of Sage Construction and Real Estate. “Technology will continue to play an important role in bridging the gap between growing industry demand, more complex projects, and a less experienced workforce.”

They also called on federal officials to double funding for career and technical education over the next five years, make it easier for people enrolled in short-term construction programs to qualify for federal Pell Grants and evaluate high schools based on career placement rates in addition to college placements.

“Washington officials must take steps to prepare and place more people into high-paying construction careers,” Sandherr said. “They also need to recognize the need to allow more people to lawfully enter the country to address workforce shortages while the domestic pipeline for preparing and recruiting workers is being restored.”

Sandherr urged Congress to pass a temporary visa program for construction workers, protect the legal status of workers in the country as part of the Temporary Protected Status program, and advance comprehensive immigration reform. He also called for additional steps to secure the border to ensure undocumented workers aren’t exploited by unscrupulous firms who are then able to underbid more responsible employers.

“A thriving, successful and diverse construction industry is the essential foundation for America’s continued economic prosperity, security and well-being,” Sandherr said. “Investing in infrastructure, making needed investments in career and technical education and reforming the immigration system will ensure that contractors can keep pace with strong demand for their services.”

The outlook was based on survey results from nearly 1,000 firms from 48 states. Varying numbers responded to each question. Contractors of every size answered over 20 questions about their hiring, workforce, business and information technology plans.

Letter to the editor: Chicago needs to enforce sprinkler codes