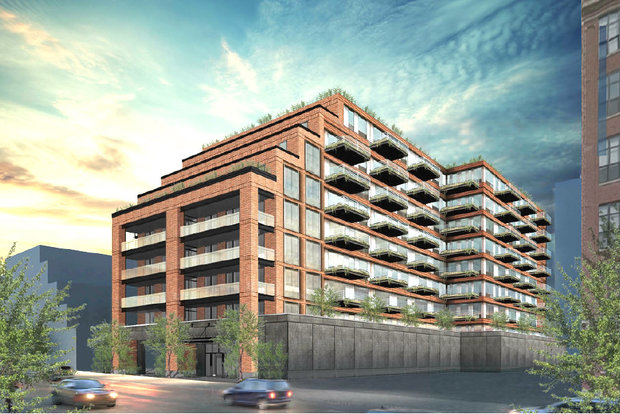 LG Development Group originally envisaged a 205-unit apartment project at 111 S.Peoria St. But West Loop neighbors weren’t having anything with that idea and put it down at a raucous public meeting earlier in the year. So the developer returned with another idea — condos, with a lower building height (115 ft. instead of 140 ft.) and much less density — only 95 condos.

And the neighbors spoke out again, at another volatile public meeting on Aug. 10.

Chicagoarchitecture.org reported that “while some felt those changes to be a tremendous concession on the developer’s part, one unimpressed statistician calculated they had only made alterations amounting to 13 percent of the overall plan. And that was just one of the many objections brought to the table.”

Ald. Walter Burnett, Jr. perhaps feels he is caught in the middle in the classic “not in my backyard” story.

“Several speakers, including attorney Sam Tenenbaum, of the 850 West Adams Association, drew applause with each sentence that pointed out what they perceived as flaws in the developer’s plan. Mr. Tenenbaum’s two main points against the proposed building were that it 1) is too big for this particular site, and 2) would have a “substantial negative effect on neighboring property values,” the website reported.

Some residents have proposed a privately operated community center on the site; though others think this use would draw even more problems.

It is unclear what will happen now.

A meeting expected to be tense and intense surely was. What will we see next for this proposed development? Ald Burnett mentioned in opening the meeting this site had been used against him in campaign efforts. That “you shouldn’t vote for Burnett; he’ll let someone build on that lot.” And he saw again tonight that the opposition is not about to back down. Can LG Development Group modify its plans once more to the West Loop community’s satisfaction? Stay tuned, folks. This one ain’t anywhere near being over.

Fox Valley AGC invites submissions for Project of the Year and...