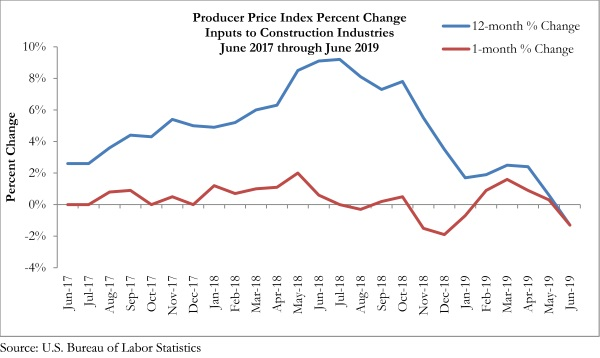 Construction input prices decreased 1.3% on both a monthly and yearly basis in June, according to an Associated Builders and Contractors (ABC) analysis of U.S. Bureau of Labor Statistics’ Producer Price Index data released in July. This is the first time in nearly three years that input prices have fallen on a year-over-year basis.

“Eighteen months ago, surging construction materials prices represented one of the leading sources of concern among construction executives,” said ABC chief economist Anirban Basu. “That was a time of solid global economic growth and the first synchronized worldwide global expansion in approximately a decade. Yet things can change dramatically in a year and a half. According to today’s data release, construction materials prices are falling, in part a reflection of a weakening global economy.

“Given that the United States is in the midst of its lengthiest economic expansion with an unemployment rate at approximately a 50-year low, such low inflation remains a conundrum,” said Basu. “However, the June PPI numbers indicate that those commodities exposed to global economic weakness have been the ones to experience declines in prices, with the exception of concrete products and natural gas. While America has begun to export more natural gas, today’s prices largely reflect the domestic demand and supply.

“With the global economy continuing to stumble, there is little reason to believe that materials prices will bounce back significantly,” said Basu. “Of course, trade issues and other disputes can quickly alter the trajectories of prices. If economic forces are allowed to play out, contractors should be able to focus the bulk of their attention on labor compensation costs and worry relatively less about materials prices.”

Construction industry added 228,000 jobs over the past year