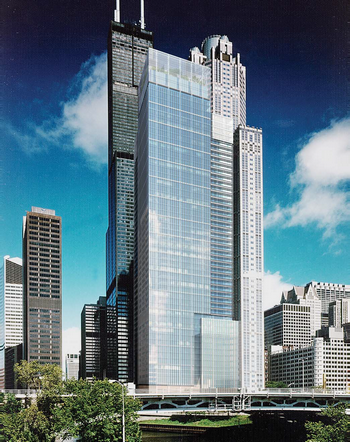 Chicago developer John Murphy has made a move to buy two parcels at 301 and 321 Wacker Dr. with the intent to install two 1.2 million sq. ft. office towers on the site.

Crain’s Chicago Business notes that though the deal is expected to close before year’s end, details have not been released.

Murphy has said construction of the $800 million towers, designed by Kohn Pederson Fox Associates (KPF), would not be done on speculation so early talks with potential tenants are already underway. Crain’s quoted Murphy as saying: “We’re making an investment because we’re very bullish on those sites in the context of the strong demand from large tenants in the marketplace today,” Murphy said. “If you’re a tenant of 300,000 sq. ft. or more, you have very limited options in the central business district.”

The globally renowned team at KPF has been responsible for New York’s Museum of Modern Art, the Rodin Museum in South Korea, Dubai’s famed The Royal Atlantis Residences, and the tower at 311 South Wacker Dr.

With the Wacker sites are already zoned, Murphy says each of the towers could be completed within two years of a signed tenant.