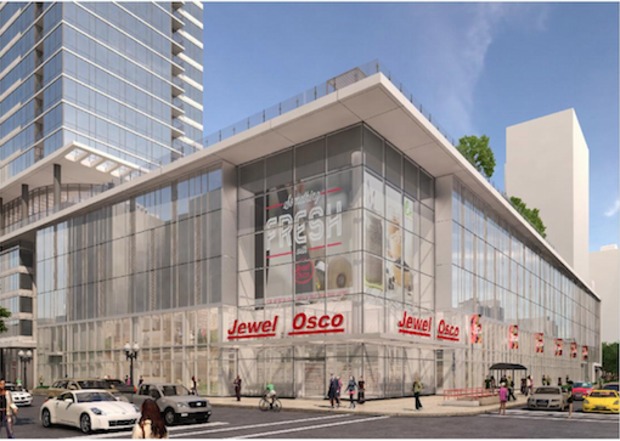 Demolition preparations have started for The Sinclair, an apartment tower at the northwest corner of Clark and Division streets, which will become the city’s second largest transit-oriented development as the project will be directly on top of CTA’s Clark/Division Red Line station, with entrances at each end of the block.

The existing Jewel-Osco store officially closed last weekend, according to Curbed.com, and tear-down work has started in the store’s interior. The store will re-emerge in a new and updated format when the project is completed.

The new apartments will be split between two buildings, including a 390-unit (35 storey) tower, along with a conversion/expansion of a four storey office building across the street into a 98-unit rental building with ground floor retail.

According to the Chicago Architecture Blog, the project’s developer is FRC Lasalle LLC (Fifield Companies) and the architect is Solomon Cordwell Buenz.