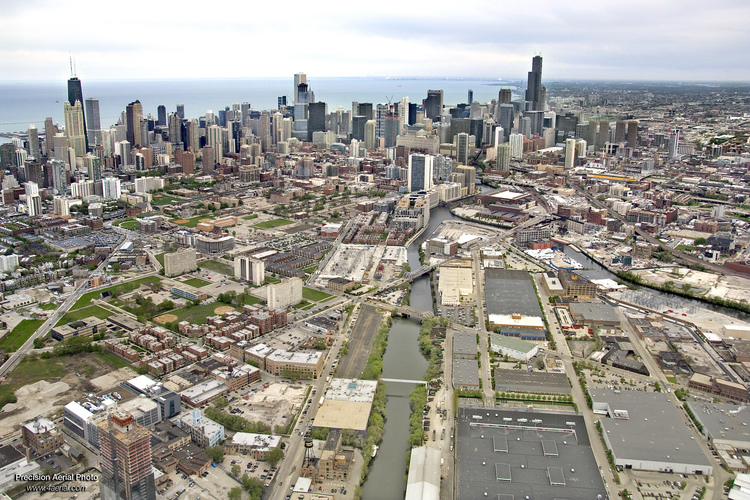 PORT Ubanism and R2 Companies have proposed an ambitious plan to revitalize Goose Island, the only man-made island in the Chicago river.

The island, created in 1853 when the North Branch Canal was dredged, originally served as a manufacturing and shipping center — before falling into a slump as manufacturers moved to the suburbs. The island has seen some development in recent years, including the Wrigley Corporation and Kendall College, but the planners and investors behind the proposal believe there are many more opportunities.

We are designers interested in development and developers interested in design. It is this cross-pollination of perspectives that, we believe, will drive an optimized built environment on Chicago’s well-preserved, yet underutilized, Goose Island.

As designers, planners, contractors, and developers, each of us views the built environment with our own spin. Some of us want to win awards, others want to make investors happy. But, what we all have in common is a willingness to create value. To take a site or a structure that is sub-optimal and create a product that is more beautiful, more inspirational, and more useful to those that interact with it than before.

We believe that Goose Island is one of the best, if not the best, opportunities for urbanization and value creation on an urban scale in the United States.

In Chicago, businesses such as Motorola Mobility, Hilshire Brands, United Continental Holdings, and Archer Daniels Midland have all left large corporate suburban campuses for downtown Chicago offices that have better access to a talented young work-force.

For Goose Island, it is a matter of time before its large, well-located and preserved lots will be developed. The island has irreplaceable riverfront access and is surrounded by dense residential and commercial neighborhoods in all directions.

Our goal in proposing a vision for Goose Island 2025 is to help those in our industry, and the general public, witness a path to an optimized and, ultimately, more valuable Goose Island. General progress driven by urbanization, thoughtful design, intelligent investing, and a little bit of common sense.

To be clear, we are not intimating that our plan is the “end-all, be-all” vision for the island. Instead, we see the release of this proposal as a starting point; an opportunity to begin a conversation with the goal of a comprehensive masterplan in the very near future.

You can download a copy of the plan here.