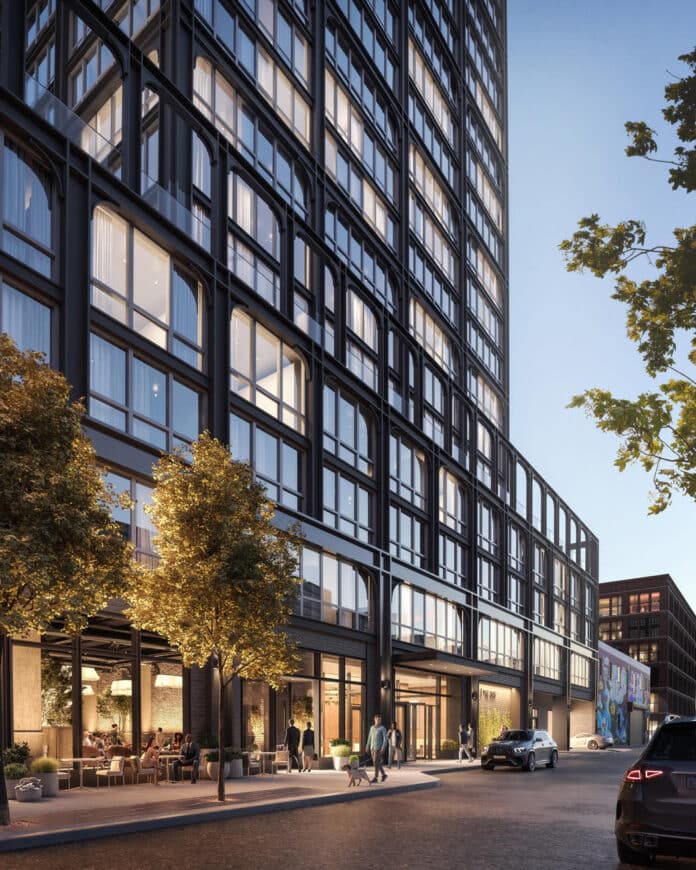 Related Midwest has unveiled the name and detailed design of The Row Fulton Market, a 43-story, 300-unit residential high-rise under construction in the heart of Chicago’s historic Fulton Market District.

The Row, expected to be completed in June 2023, will include convertible, one-, two- and three-bedroom apartments, including penthouses, all with sweeping views.

As one of Chicago’s first 80/20 buildings – created under recently passed Affordable Illinois legislation – The Row will set aside 20% of residences, or 60 apartments, as affordable, pioneering a new model for inclusive development that reflects Related’s longstanding commitment to equitable housing.

In conjunction with its contracting division, LR Contracting Company, Related Midwest is again partnering with BOWA Construction to build The Row, the city’s first high-rise co-led by a Black-owned contractor.

BOWA, a certified Minority Business Enterprise (MBE) and member of the Illinois Black Chamber of Commerce, Business Leadership Council and the Chicagoland Associated General Contractors, has previously partnered with Related Midwest on a wide variety of projects including Lathrop and the Taylor Street Library and Apartments at Roosevelt Square.

“The Row represents the one-of-a-kind neighborhood in which it is located, delivering aspirational real estate to Chicagoans who want to immerse themselves in the energy and creativity that have put Fulton Market on the map both nationally and globally,” said Curt Bailey, president of Related Midwest. “In anchoring the new epicenter of downtown, The Row gives residents a front-row seat to the area’s continued transformation.”

Morris Adjmi Architects drew inspiration from the historic structures throughout the former meatpacking district and nearby L tracks. The slender tower is set back from a five-story podium that conceals parking with residences that front Peoria Street and first-level retail space.

The Row is Related’s fourth collaboration with Morris Adjmi Architects nationwide and second in Chicago; the companies most recently collaborated on the 300-unit Landmark West Loop at 1035 W. Van Buren St., which opened in 2017.

“For the design of The Row, we wanted to reinterpret recognizable industrial motifs that relate to Chicago’s larger context while seamlessly responding to the historic texture and scale of the beloved Fulton Market neighborhood,” said Morris Adjmi, FAIA, founder and principal of Morris Adjmi Architects. “Preserving the pedestrian experience along Randolph and Peoria streets was extremely important.”

A 13,800-sq. ft. landscaped recreational deck will be built on the west side of the building, with a lap pool, dining and seating areas and green space.