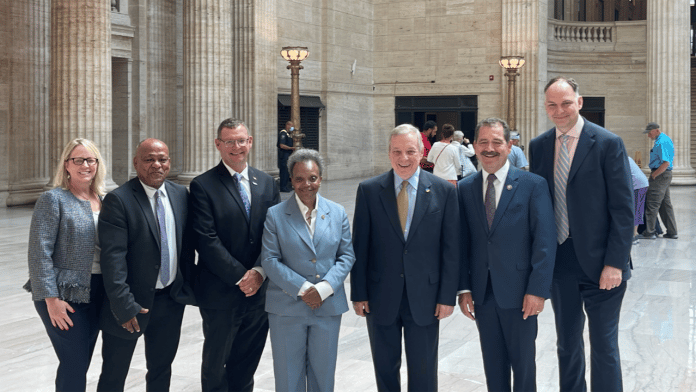 “Chicago Union Station has long been the hub of our passenger rail network in Illinois and the Midwest,” said U.S. Senate Majority Whip Dick Durbin. “But it’s time for a new and transformational vision that will improve and expand passenger rail. I’m glad to join Mayor Lightfoot and regional leaders in pushing to get this essential project across the finish line.”

“Chicago is grateful to be a part of one of the most robust transportation systems in the country,” said Chicago Mayor Lori Lightfoot. “This transformational project for a passenger rail will strengthen this system, as well as deepen our regional partnership with other transportation stakeholders.”

The project is expected to:

“We’ve been working on these ideas and bringing the partners together for years. We can’t be sure we will get all the funding we’re seeking, but our goals line-up exactly with the USDOT’s Mega project goals,” said Amtrak CEO Stephen Gardner. “While these are big-ticket items, there are big needs here in Chicago.”

Michigan State Transportation Director Paul C. Ajegba said: “The Michigan Department of Transportation supports Amtrak and our partners in applying for the federal MEGA grant application. Improvements to Chicago Union Station and the final design of double tracking on the Amtrak-owned line from Niles through and beyond Dowagiac, Michigan, will be a huge benefit for rail travelers.”