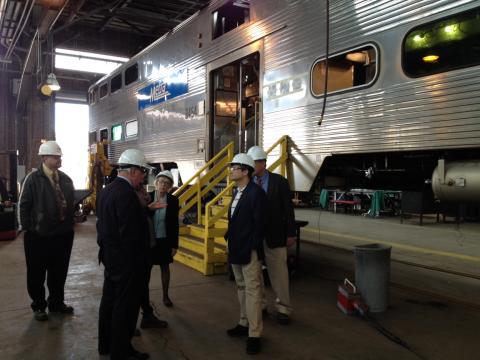 Metra has announced a long-term $2.4 billion plan to modernize its aging fleet of railcars and locomotives through a phased-in process. The multibillion dollar plan also includes rehabilitation and maintenance of remaining railcars and engines, said Metra board chairman Martin Oberman and Metra executive director/CEO Don Orseno.

Metra will upgrade its 49th St. yard, where most of its rail car rehabilitation work takes place, by investing $20 million of the required $341 million to increase its capability from 40 to 60 cars each year, allowing for about 455 cars over the 10-year program.

The plan also calls for 85 locomotives in the fleet to be rebuilt over the next 10 years for approximately $178.5 million with a 25-year life expectancy. It is anticipated that Metra will buy 52 new locomotives with expected delivery from 2020 to 2024 for about $416 million.

The plan also allocates an additional $275 million to meet the more than $400 million required to implement Positive Train Control (PTC), a GPS-based safety technology designed to automatically ensure compliance with speed limits and other operating standards. Metra has already set aside $133 million for it.

Additional plans will be developed to address other areas, including tracks, structures, signals, facilities, stations and parking.

Metra will pay for the plan by issuing its own bonds or use similar options, starting with $100 million in 2015 followed by similar amounts in 2017, 2019 and 2022. The company is going to increase fare to pay debt service on all the financing over the decade and to cover annual anticipated increased costs of doing business. Apart from Metra’s $400 million contribution and an assumed $710 million provided by state and federal funds, it will need $1.3 billion from federal or alternative resources and financial planning.

Metra can get only about one-fourth of the needed $9.9 billion from state and federal funds to maintain its system over the next decade, according to the RTA’s 2013 Capital Asset Condition Assessment Update Report.

Hence “replacing rolling stock is the highest priority, due to the age of Metra’s fleet and the fact that the condition of our cars and locomotives is so essential to providing high-quality, reliable and comfortable service to our riders,” said Oberman.