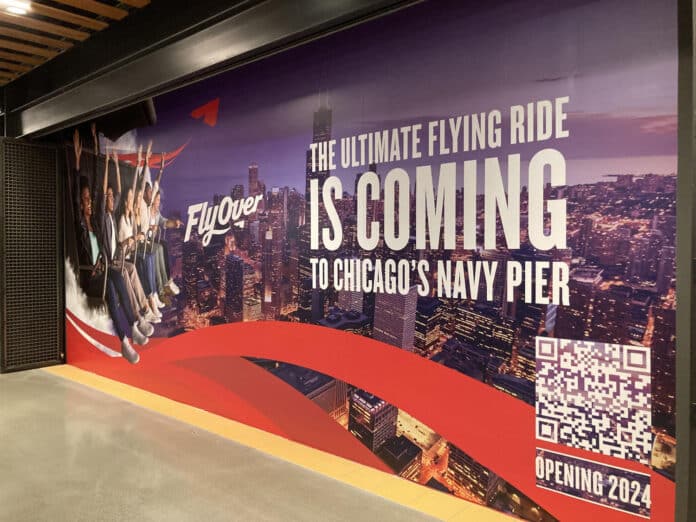 McHugh Construction says it has begun construction of the 48,000-sq. ft. space that will house FlyOver, a new flight ride attraction at Chicago’s historic Navy Pier.

Expected to open in spring 2024, FlyOver replaces Navy Pier’s longtime IMAX theater, located near the Centennial Wheel on the west end of the pier. McHugh began demolition of the existing space in June 2022 in preparation for building out the 60-ft.-high, 80-ft.-wide space.

Once completed, the immersive attraction will provide guests with the feeling of flight as they hang suspended from moving seats with their feet dangling below. Exclusive flight ride films projected on a 65-ft. wrap-around screen will showcase Chicago as well as iconic landscapes from around the globe as riders enjoy a full multi-sensory experience, complete with mist, wind and scents.

FlyOver, from global attractions and hospitality company Pursuit, will be the first ride of its kind in Chicago. The experience will be based on similar FlyOver attractions from Pursuit located in Las Vegas, Canada and Iceland.

“McHugh has an extensive track record of success when it comes to building on Navy Pier, including past projects like the Centennial Wheel; Offshore, the world’s largest rooftop bar, according to the Guinness Book of World Records; and Sable at Navy Pier, a $100 million, 223-room hotel that is part of Hilton’s Curio Collection,” said Andrew Totten, vice president of McHugh Construction.

“We were excited to return to Navy Pier and create a new space to enhance the visitor and tourist experience in Chicago.”

Pursuit initially hired McHugh to perform a feasibility study for the demolition of the IMAX Theater as well as the construction of the new attraction. Following the study, Pursuit signed a lease for the space, selected Chicago-based Epstein as the architect, and hired McHugh as the project’s construction manager.

“Our company understands the special constraints and considerations associated with undertaking a project of this scale at this location – such as minimizing disruptions to existing Navy Pier operations and maintaining a positive guest experience for the millions of visitors that flock to the pier annually,” said Michael Meagher, president of McHugh Construction.

“Given our history, the Pursuit team chose to engage McHugh early in the preconstruction process for FlyOver.”

“With interior demolition of the former IMAX now complete, the build-out work can now begin on FlyOver,” Totten said. “The space will be equipped with state-of-the-art video, lighting and sound systems designed to give users a fully immersive experience.”

The FlyOver project, with estimated construction costs of $13 million, will support approximately 250 jobs.

“McHugh’s involvement on FlyOver represents the latest chapter in our longstanding relationship with the pier, which most recently culminated with the grand opening of Sable at Navy Pier last March,” said Meagher. “We look forward to completing FlyOver in 2024 and feel privileged to play a role in the ongoing evolution of this historic pier as it reinvents itself as the premier civic destination for Chicagoland residents and tourists alike.”