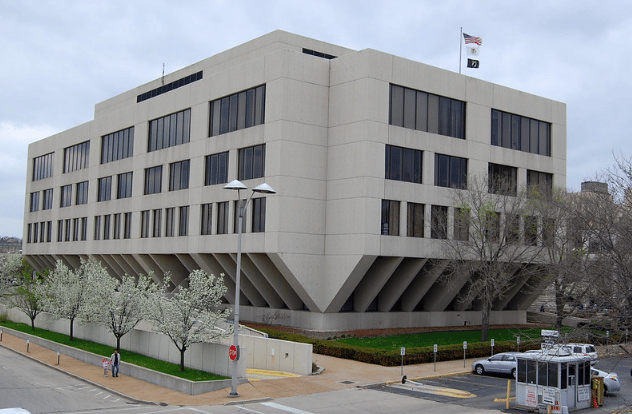 Landmarks Illinois and Courthouse Preservation Partnership are seeking qualified developers and architectural firms for the former Will County Courthouse in Joliet. The architecturally significant but vacant courthouse faces a demolition threat, and Landmarks Illinois and the Joliet-based Courthouse Preservation Partnership are issuing an exploratory Request for Expressions of Interest (RFEI) for potential reuse ideas.

The former Will County Courthouse is owned by the county and has been vacant since 2020, when the county moved into its newly constructed courthouse. Built in 1969 and designed by Otto Stark of C.F. Murphy Associates, the former courthouse represents the first and largest brutalist building in the Will County region.

Will County officials passed a resolution calling for the building’s demolition. This demolition threat led Landmarks Illinois to include the building on its 2022 Most Endangered Historic Places in Illinois.

“There is growing interest among Will County residents to see their one-of-a-kind former courthouse reused instead of torn down, but Will County officials continue to insist there is no reason to initiate any sort of public process that would explore reinvestment of the property,” said Bonnie McDonald, Landmarks Illinois president and CEO.

“This lack of action has encouraged Landmarks Illinois and its local preservation partner in Joliet, Courthouse Preservation Partnership, to solicit expressions of interest, which we will present to the county as a means to encourage an official Request for Proposals for the building’s reuse.”

The exploratory RFEI process is for advocacy purposes only. and is not affiliated with Will County, which owns the site. It will remain open until March 10, 2023.

Submissions should include a description of a potential reuse – floor plans, elevations and/or reuse renderings are encouraged. Additional information requested in the RFEI includes potential partners and funding sources for any potential reuse.

View the full RFEI for additional requirements and to see building floor plans and other specifications.