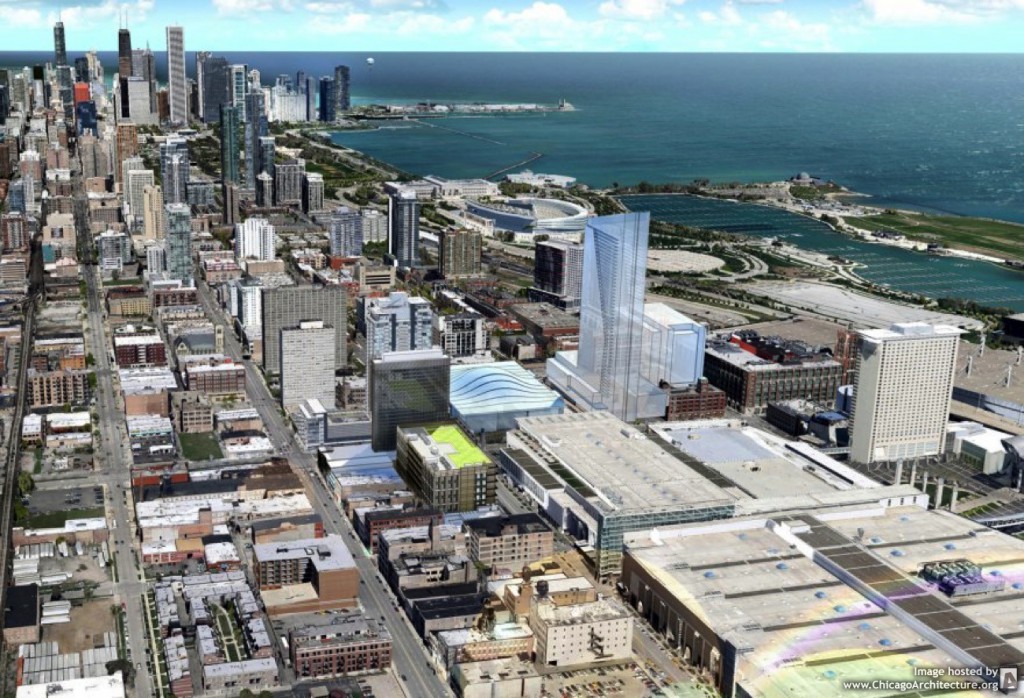 At a public meeting hosted by Prairie District Neighborhood Alliance on Sept. 15, Chicago-based McHugh Development & Construction and architect Joseph Antunovich have provided details about their ambitious plan to construct a new hotel and a data center at Michigan Ave. and Cermak, reports Chicago.curbed.com.

Across the street, another similar construction plan by the Metropolitan Pier and Exposition Authority (McPier) is underway, which together with McHugh’s plan, would radically change McCormick Place.

The firm has proposed three buildings ― the hotel at 111 E. Cermak between Michigan Ave. and Indiana Ave., a data center along Indiana Ave. between 23rd St. and Cermak Rd., and retail space along Michigan Ave. McHugh will use 2.5 acres of land in total for the development. With the help of a speedy approval process, the data center construction may start as early as mid-November this year and the project is expected to be completed by summer 2017.

The 28-story hotel will be 320 ft. high with 500 rooms and 15,000 sq. ft. of retail space. Confirming a two-story restaurant with the lobby on Cermak on the northeast corner, Antunovich said “retail and support spaces will encompass entire first floor.” He has also suggested a third-floor bridge connection to McCormick place. Chicago’s First Hospitality Group will operate the hotel.

The six-story high-tech data center will include 2,500 sq. ft. of active office space with large street-front windows on the first floor as well as sophisticated sound-absorbent materials and emergency generators. The data center will be connected to the historic Rambler Building which will be converted into retail and a parking lot under the supervision of the Landmark Commission. The building will serve as the main entrance to the data center, the 114 parking spaces on the ground and second floor, and a coffee shop on the corner of 23rd Street and Indiana Ave. The ground floor will feature local artwork on its street-front windows.

The third development is the major restoration of the historic building at 2515 S. Michigan Ave. which the firm will combine with the hotel building to provide additional retail and commercial space of 31,904 sq. ft.

“We’re developing a design we think is respectful to the historic makeup of Motor Row,” Antunovich was quoted saying in Chicagoarchitecture.com. “We hope it will spur the development of Motor Row. We’ll match materials and scale of the old buildings.”

Though few doubt this large-scale development’s effect on the quiet neighborhood, most have positively welcomed the proposal.

The project is expected to create 500 construction and 250 permanent jobs.