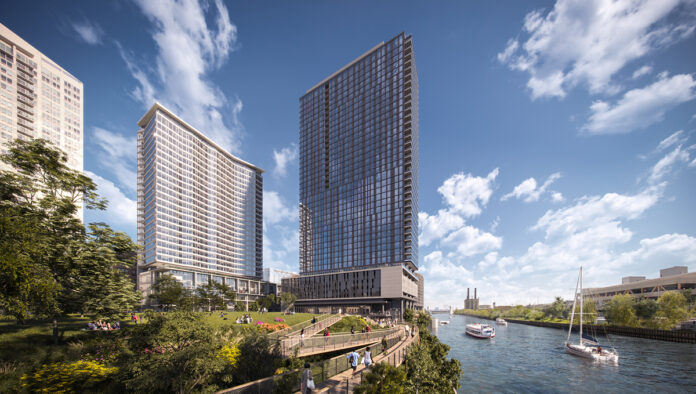 Lendlease says it is building The Reed, a 41-story residential high-rise at 234 W. Polk St., as the next phase of its Southbank development in Chicago’s Printers Row neighborhood.

The new building, with 216 condominiums on its upper floors, marks the second residential tower in Southbank, a 7-acre master plan centered around 2 acres of public green space, known as Southbank Park, along the South Branch of the Chicago River.

“We are excited to begin the next chapter of Southbank, a development that underscores Lendlease’s commitment to urban regeneration and that already has transformed a prime stretch of the Chicago River into an amenity for residents and neighbors in the surrounding community,” said Ted Weldon, executive general manager of development for Lendlease’s Chicago office.

“For the first time, Southbank residents will have the opportunity to own their piece of the riverfront lifestyle introduced by The Cooper, the first phase of our master plan that was completed in 2018. The Reed builds on that vision by introducing the first for-sale residences at Southbank and extending the adjacent Riverwalk, providing an activated connection to Polk Street.”

Project architect Perkins and Will designed the structure, which also designed The Cooper and the broader Southbank master plan.

“The Reed’s design integrates seamlessly with the first phase of Southbank. Its rich color and solidity provides diversity to the site and a balanced contrast to the lighter materials selected for The Cooper,” said Bryan Schabel, design principal at Perkins and Will. “The patterning of the tower’s north, south and east facades shifts between residential tiers, while the all-glass western facade extends out to celebrate the river and the site’s dynamic views.”

The Riverwalk extension was developed by Lendlease in conjunction with Southbank Park, which serves as the flagship offering within the Southbank neighborhood. Designed by Chicago-based landscape architecture firm Hoerr Schaudt, whose plan was implemented by Confluence, the publicly accessible green space features a central lawn, bicycle racks and meandering walkways that lead down to the riverfront.

The Riverwalk itself is programmed with a viewing platform, seating areas and natural stone amphitheater created from lannon stone – uncovered during construction of the park – that originally served as the foundation of Chicago’s Grand Central Station, which operated on the site from 1890 to 1969.

The developer says the building will be designed to LEED Gold and FitWelcertification standards.

Existing sustainability features in Southbank Park include an on site stormwater management system designed to mitigate runoff. In restoring this stretch of the riverfront, Lendlease has also created habitats that support native flora and fauna, honeybees and migratory birds. The Reed will also feature a rooftop farm, through which residents and local restaurants will have access to fresh honey and produce grown on-site.