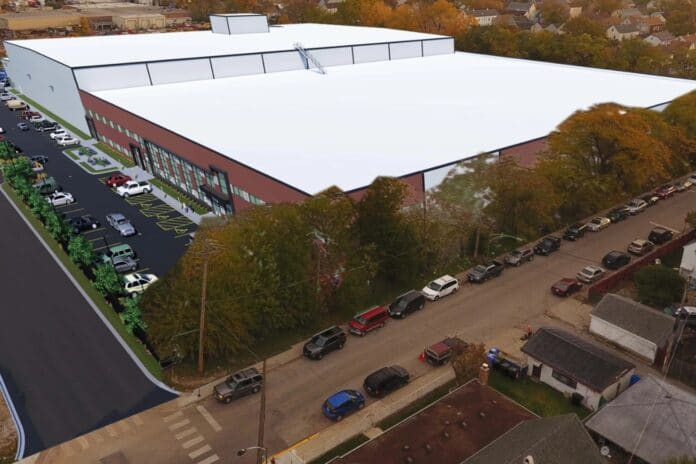 The project at 1924 W. 46th St. will redevelop 8.3 acres of city-owned land that has been vacant for more than 15 years. The new structure will include 220,000 sq. ft. of food production and storage space, as well as parking for more than 150 vehicles.

“After years of neglect behind a chain link fence, this site is finally getting the rejuvenation it deserves,” Chicago mayor Lori Lightfoot said in an April 19 statement.

“This exciting project will reinforce Chicago’s reputation as the nation’s leader in food production. It also demonstrates Harvest Food Group’s desire to continue providing employment opportunities to Southwest Side residents and revitalizing the communities they call home.”

Based on community input to mitigate commercial vehicle traffic, Harvest will widen the 4500 and 4600 blocks of Damen Avenue at an estimated cost of $2 million; provide landscaping and green spaces for public use along Wolcott and 46th streets; and include design details in context with neighboring land patterns.

“We at Harvest Food Group are thrilled to remain in the City of Chicago,” Harvest Food Group founder and CEO Jason E. Eckert said in the statement. “This new facility will allow us to continue to grow and add value to the lives our employees and our community. Harvest Food Group is committed to partnering with the city to honor our core principals of workers, family, and community.”

The site in the Stockyards Industrial Corridor, most recently used for container storage,  was condemned and acquired by the city in 2006. It has been vacant ever since, partly due to environmental conditions and access issues that impeded its redevelopment.

The block-long property is appraised at approximately $3.5 million. Under a pending redevelopment agreement with the city, the land would be sold to the developer for $1 to offset an estimated $1.5 million in environmental remediation costs and the public improvements to Damen Avenue. Terms could be finalized this summer.

Founded in 1999, Harvest Foods provides manufacturing, packing and distribution services to a variety of food industry companies across the country. The new facility will replace its current operations in Archer Heights and provide a more efficient environment to expand and add 50 new jobs.

Other nearby projects moving forward include the $73.6 million United Yards mixed-use project near Ashland and 47th streets, as well as $15 million in nearby streetscaping, both through the INVEST South/Invest initiative, which has channeled $1.4 billion in investments into 10 underserved communities over the past two years thanks to public and private sector partnership, the mayor’s office reported.