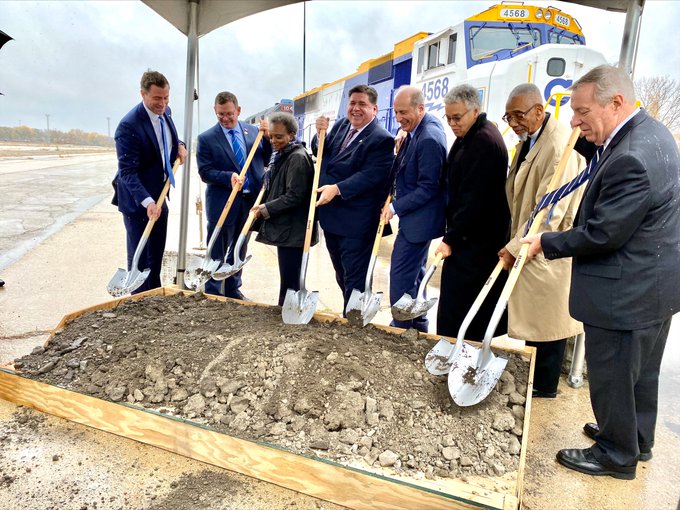 Construction was also launched on the 71st Street grade separation (GS19) project, which will eliminate an existing grade crossing of the CSX railroad with 71st Street. The projects are the first two components of four major projects in the 75th Street Corridor Improvement Project.

The P3 and GS19 projects have linked stage 1 construction work schedules. The Forest Hill Flyover (P3) project construction is scheduled to take two years. Construction will begin in September 2022 and completion is anticipated for 2024. The 71st Street Grade Separation (GS19) project is an integral component of the P3 project; therefore, there are design efficiencies on the projects were done in tandem.

“This project will help ease congestion for the motoring public,” said Zach Wright, CSX Manager of Network Planning and Performance. “CSX is excited to be a part of this public-private team effort which will eliminate the existing CSX grade crossing at 71st Street, not only enhancing safety but also helping improve fluidity in one of the most heavily trafficked rail corridors.”

About half a billion dollars in state funding is earmarked to bring 21st century design to CREATE’s roads and rail.

The estimated cost for the Forest Hill Flyover and 71st Street Grade Separation projects is $380 million. In 2018, the U.S. Department of Transportation awarded $132 million to the CREATE Program partners through the Infrastructure for Rebuilding America (INFRA) grant program for the 75th Street Corridor Improvement and Argo Connections (B9) projects. More than $260 million in state, local, and private funding has been awarded for construction of the Forest Hill Flyover (P3) and 71st Street Grade Separation (GS19) projects.

The Forest Hill Flyover (P3) project will build a bridge to improve one of the largest rail chokepoints in the nation and the most congested in the Chicago terminal, Belt Junction.

The accompanying 71st Street Grade Separation (GS19) project will solve conflict points at this rail-rail crossing, where pedestrians, bicyclists and drivers using 71st Street must currently wait for trains to pass. This crossing also presents a safety risk for drivers and pedestrians which will be ameliorated by the GS19 project.

“Funding secured through the Infrastructure for Rebuilding America (INFRA) grant program for this project of national significance was critical to getting us to this moment here today,” said U.S. Senator Richard Durbin. “Addressing this critical chokepoint will allow for more efficient movement of people and goods across the region as well as the country.”