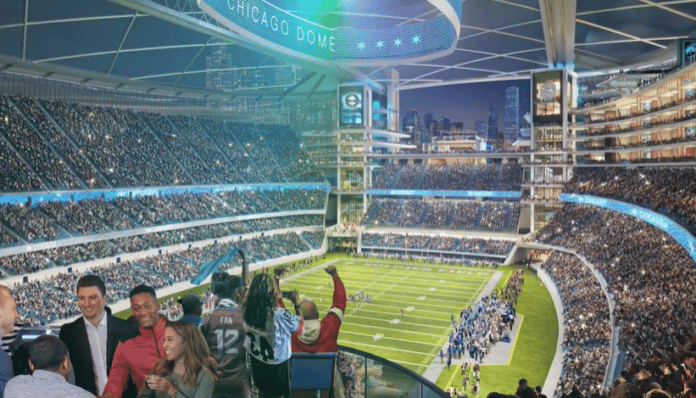 The city of Chicago is making one attempt at keeping the Bears in the city.

“This is a proposal that we think sets a compelling case for a team like the Bears to want to stay at Soldier Field,” LandMark president Bob Dunn said in a statement.

The plan is to turn Soldier Field into “the next generation of sports and entertainment venues” and it comes with a hefty $2.2-billion price tag.

The Reimagine Soldier Field Coalition created the video fly-by of areas both in and around the stadium, including a new transit hub and concert space.

A glass dome with a retractable roof would also potentially make Chicago a candidate to host Super Bowls, Final Fours and concerts.

Landmark’s proposal includes adding clubs on both the east and west sides and a veteran’s memorial to pay homage to those for whom the building was named.

With a new series of skyboxes, clubs and lounges, with the aim of increasing seating capacity to 70,000.

Landmark has partnered with numerous NFL franchises, including the Minnesota Vikings on the construction of U.S. Bank Stadium. The group also helped with massive renovations to Lambeau Field and MetLife Stadium.

GP and HPA celebrate groundbreaking for One Chicago, a new dual-tower...