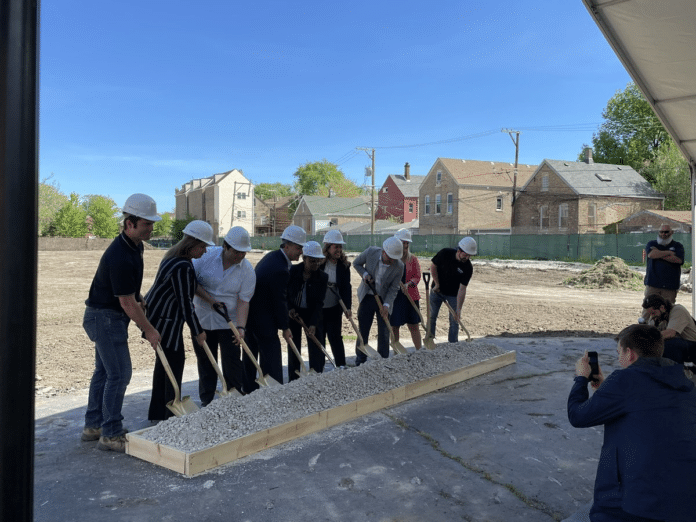 Chicago Public Schools is investing $16.6 million in improvements at the Farragut Career Academy High School in the Little Village community.

School officials and politicians including Chicago Mayor Lori Lightfoot broke ground at a new soccer field at the school campus on May 17.

“This new soccer field is not only an enriching space for Farragut high school students to enjoy, but it’s a reminder that Little Village is an important part of Chicago,” Lightfoot said in a statement “These improvements are a fiscal and emotional investment in our youth and our school communities — and just one of many ways that my administration, CPS, city and state leaders are strategizing to improve our schools and neighborhoods. I’m confident this new soccer field will create generations of soccer players, extracurricular and academic activities that will reflect our collective commitment to the Farragut community.”

As part of the second phase of the complex, CPS will invest in installing a pre-fabricated press box, public announcement system, restrooms, and community space to be added to the site by Fall 2023.

The renovations at Farragut include academic-related investments to the Southwest side school, which has recently added new academic programming, including the rigorous International Baccalaureate (IB) Program, to support the CPS district and school’s vision.

The building renovation, paid through CPS capital funds, includes a new law classroom, teaching lab, and a resource and study room for the school’s IB Program, a global education model that helps students think critically, solve complex problems, and become more culturally aware through the development of a second language.

Other improvements include a new roof, tuckpointing, electrical updates and accessibility upgrades such as concrete replacement at the building’s main entrance and a rear accessible ramp entrance. Path Construction Company Inc. is listed as the general contractor on a $6 million building permit.

Meanwhile, The George Sollitt Construction Company is named on a separate $2.3 million permit for the new artificial turf field and related fencing.