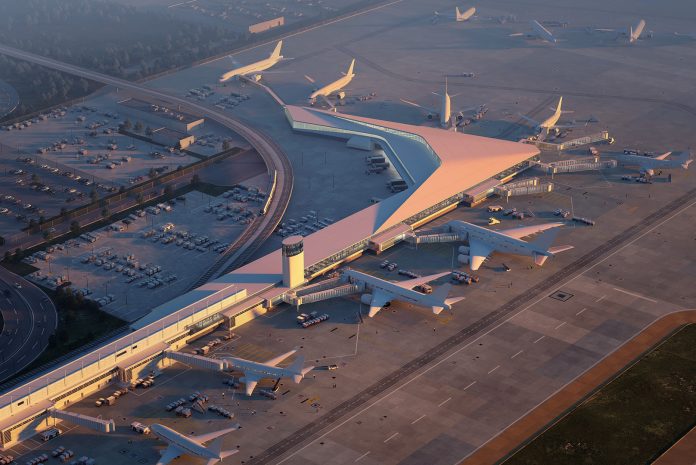 Chicago’s O’Hare Airport is experiencing some of its lightest traffic in recent history because of the COVID-19 pandemic, but this isn’t stopping work on the Terminal 5 expansion.

The City of Chicago has issued a $83.25 million permit for the “superstructure of east expansion for proposed Terminal 5 expansion”.

The Terminal 5 project has an overall cost of $1.2 billion, and has been designed by HOK and Muller and Muller Inc. It will result in more than 300,000 sq. ft. of additional space.

Austin Power Partners has provided a link and information for subtrades and suppliers wishing to prequalify/bid on the work.

The expansion and renovation of Terminal 5 is the first phase and a key component of the O’Hare 21 program, an effort by the City of Chicago and the airlines to modernize one of the world’s most-traveled airports, HOK says on its website. “It will increase the terminal’s capacity by 25 percent, adding new gates and upgrading existing gate sizes to accommodate the larger aircraft used for international flights.”

The Terminal 5 work is part of the larger $8.5 billion “O’Hare 21” modernization effort, which commenced  in 2017 with a five-gate addition to Terminal 3.

“Opening up Terminal 5 to amenities provided in other areas of O’Hare, improving airline clubs, enhancing shopping and dining space, and designing a clear wayfinding system will create a more comfortable experience for passengers,” HOK says. “The project also is adding four new security lanes to the checkpoint and improving immigration facilities. The 25-year-old baggage handling system will be fully modernized by 2022.”

“The design will future-proof gates to accommodate new and next-generation aircraft, as well as smaller domestic jets. Though the gates will serve wide-body aircraft, they will be easily convertible to narrow-body positions as the terminal is repurposed in the future.”