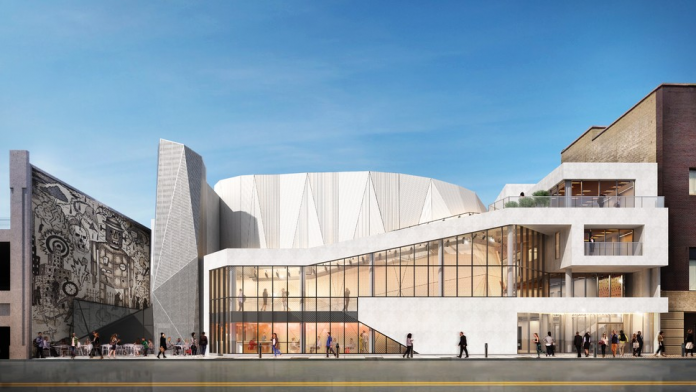 Playbill reports the new building is part of the theatre organization’s multi-year campus expansion in Lincoln Park (where it is currently located), and will allow Steppenwolf’s audience to grow from 180,000 to 225,000 annually.

The new building will feature a 400-seat in-the-round theatre. There will also be a dedicated education floor, a two-story atrium lobby, a wine bar and a sidewalk lounge, along with a costume shop and other production facilities. Playbill reports the current upstairs theatre, which was originally built as a rehearsal space, will return to its original purpose and house two rehearsal spaces after the completion of the new theatre.

“The new theatre is a bold, modern in-the-round space offering unparalleled levels of focus for the actors and audience. Chicago doesn’t have another space like it,” the publication quoted Gavin Green, senior partner at London-based theatre designer Charcoalblue, as saying. Locally headquartered Adrian Smith + Gordon Gill Architecture is also working on the project.

“This is a monumental moment for us that is more than two decades in the making—built on the shoulders of the former leaders, the ensemble, the board, and the staff who have touched this project and together have made this vision a reality,” Playbill quoted artistic director Anna D. Shapiro.