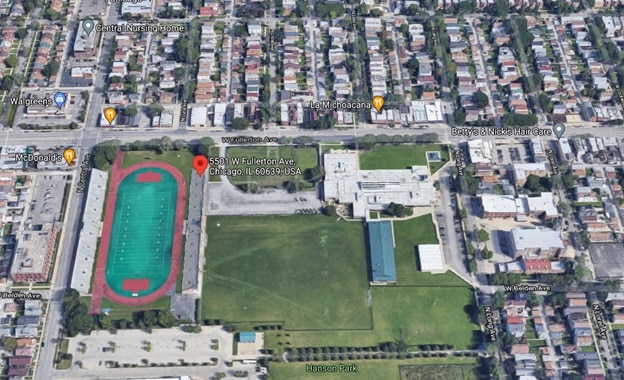 The Chicago Fire Football Club is proposing to construct and operate a training facility in Hanson Park in the Belmont Cragin community.

The approximately 32-acre project would require a Master Planned Development (PD) zoning designation, in addition to other requirements by multiple public agencies.

The Fire presented its initial plans to the community at a virtual town hall on June 10, 2021. The proposed complex at 5501 W. Fullerton Ave. would include a three-story performance center; seven soccer fields; modifications to Hanson Stadium to enable year-round use; parking; landscaping; and outdoor lighting.

The site, bounded by Fullerton, North, Grand and Central avenues, is owned by Chicago Public Schools (CPS) and Cook County. The Fire is planning on entering into a ground lease and shared use agreement with CPS to use the land and operate the facility. The use agreement would enable the general public to access a portion of the complex for various activities.

Input received from the town hall will be used by the Fire to finalize the Master PD application, which will be submitted to the City Council. The application will be reviewed by the DPD before being forwarded for review by the Chicago Plan Commission, the Committee on Zoning, Landmarks and Building Standards, and the full City Council.

Work really has started on GEMS Academy next to Vista Tower