The projects, which are valued at approximately $200 million, were selected in response to a second round of Request for Proposals (RFP) issued by the Chicago’s Department of Planning and Development (DPD) last winter. The four RFP selections will collectively create more than 215 residential units, 40,000 sq. ft. of commercial space, and approximately 900 permanent and temporary jobs on commercial corridor sites that are either vacant or underutilized, Mayor Lori Lightfoot said in an Aug. 23 statement.

The three additional minority-led proposals planned for nearby city-owned locations will create dozens of additional residential units, tens of thousands of square feet of new commercial space, and more than 100 new hotel rooms, pending refinements to be completed in the months ahead.

“One of my highest priorities is bringing catalytic investments to our South and West Side communities, which have gone far too long without revitalization,” Lightfoot said in the statement. “These new projects will allow us to do that and represent an important collaboration between our city departments and the communities we serve. I want to give a huge congratulations to all of our finalists and look forward to cutting the ribbon to their exciting, equity and inclusion-driven projects in the very near future.”

The RFPs’ 15 responses were subject to a months-long review process that included neighborhood roundtables and selection teams comprised of City of Chicago staff and community-based evaluators. Final selections were based on responsiveness to the goals of each RFP, developer experience and capacity, development team diversity, community wealth-building components, proposed designs, financial viability, community feedback, and other criteria, the city says.

All of the projects are led by minority firms with multiple minority- or women-owned team members.

“The RFP responses exceeded our most optimistic expectations in both quality and diversity,” DPD Commissioner Maurice Cox said. “As a result, we’re ensuring that several of the runners-up have a way to move their projects forward on nearby city-owned sites. This is what social equity is supposed to look like at the neighborhood level.”

The selections include the following development teams, projects, and locations: 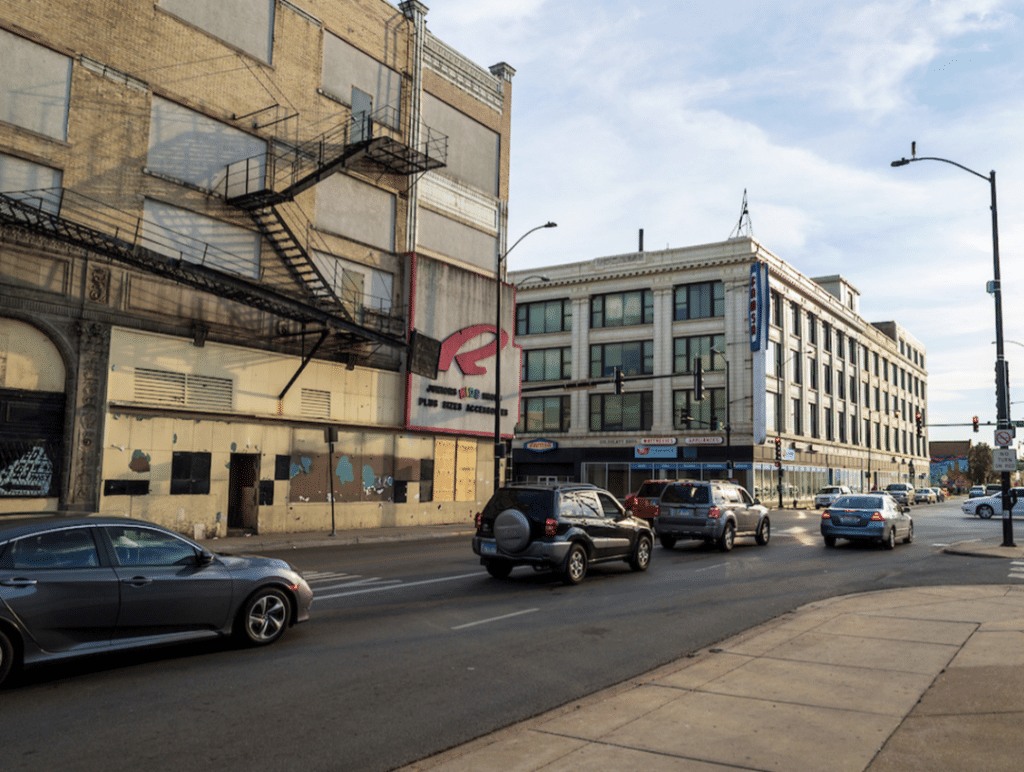 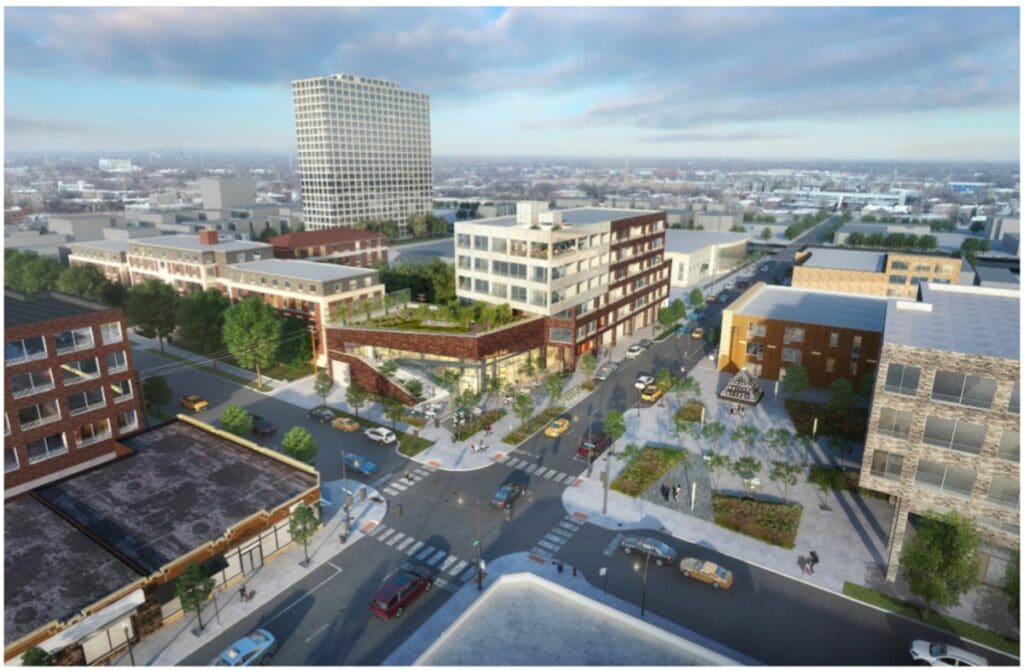 The Legacy District is a $19.2 million joint venture of KMW Communities and LG Development in partnership with Bronzeville Community Partners. Planned for 0.6 acres of vacant, city-owned land on the southwest corner of 47th Street and Vincennes Avenue, the proposed project will create a six-story building containing 12,000 square feet of commercial space and 25 mixed-income residential units. The project will create 174 permanent jobs and 140 construction jobs.

The additional team selected for alternative sites, 47th/Vincennes Partnership, is in active discussions with the city and Alderwoman Pat Dowell on implementing portions of its mixed-use proposal on city-owned land on 47th. Project details could be announced later this year.

“Today we celebrate new development coming to the ward of which we can all be proud,” 3rd Ward Alderwoman Pat Dowell said. “I have advocated throughout my term as alderman to maximize opportunities for African Americans to participate in the rebuilding of the community and to share in the wealth that has often eluded them. I look forward to the groundbreaking and to working with these two teams on this next chapter of transforming our community. I want to thank Mayor Lightfoot for her commitment and dedication to equity and for recognizing that all Chicagoans, no matter where they live deserve a vibrant robust community.”

Lawndale Redefined is a $31.4 million joint venture from GRE Ventures, Imagine Group, and 548 Development. Planned for an acre of vacant, city-owned and private land on Ogden Avenue between Homan and Trumbull avenues, the project consists of 60 mixed-income apartments, three market-rate townhomes, retail and restaurant space, and a stand-alone community center with technology and arts programming. Outdoor amenities include a plaza with public art and other cultural amenities. The project will create 30 permanent jobs and up to 120 construction jobs.

“I am looking forward to this over $31 million project coming to North Lawndale” said 24th Ward Ald. Michael Scott. “This type of development is exactly what North Lawndale needs and it’s because of the Invest South/West initiative that new jobs, affordable housing, community engagement centers, restaurants and so much more will be put into this one development. This is a catalytic investment for North Lawndale and I can’t wait to see the good it brings to my ward.”

The additional team selected for alternative sites, Proxima Management Hotel and The Tapestry, are in active discussions with DPD to implement portions of their mixed-use proposals on nearby locations along Ogden. Project details could be announced later this year. 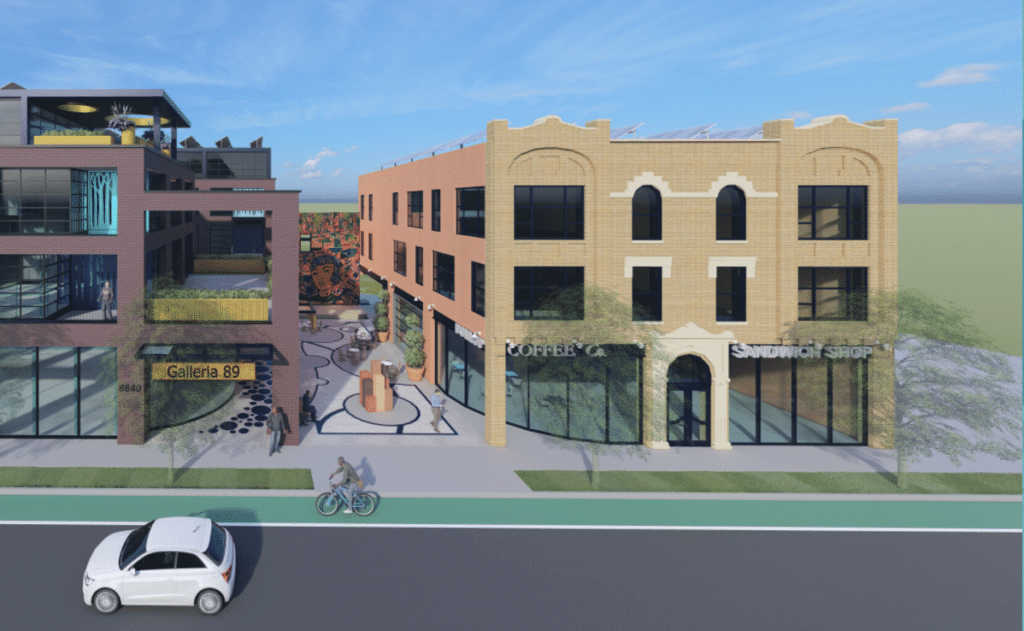 Galleria 89 is a $23.5 million project from 548 Development planned for approximately .6 acres of underutilized properties on the 8800 block of South Commercial Avenue. The project will create a four-story building with 35 mix-income apartments and rehab an existing, three-story building with 10 mix-income apartments. Approximately 12,000-sq. ft. of commercial space on the ground floors of both buildings will include a café, business center, and bike shop. The project will create more than 60 permanent jobs and more than 100 construction jobs.

“Galleria 89 is something I am so happy to celebrate in my ward. This development will provide much-needed jobs, affordable housing, and community business spaces in South Chicago and I look forward to seeing the project once it’s completed,” said 10th Ward Alderwoman Susan Sadlowski Garza. “This type of investment is what neighborhoods like South Chicago need if we want to see positive change in the communities and I am thankful this change is happening in my ward.”

Each selected project will be refined in the months ahead through additional community engagement activities prior to formal review-and-approval processes that could include the Community Development Commission, the Chicago Plan Commission, and City Council, and other entities. Groundbreakings could begin in spring 2022.