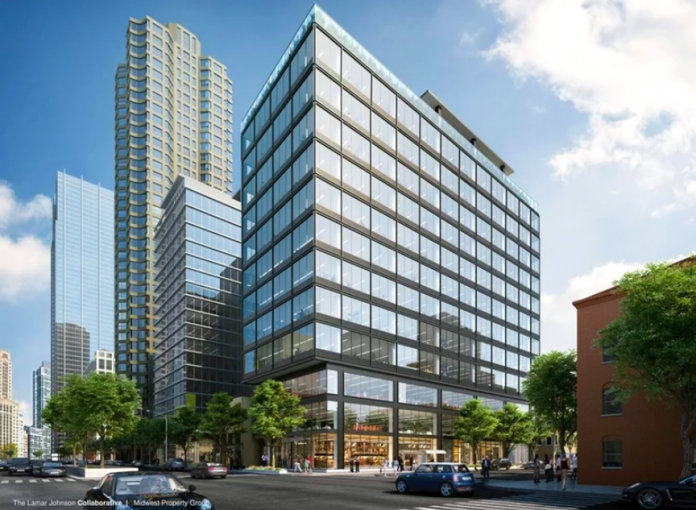 CA Ventures is nearly doubling the size of its downtown Chicago headquarters and joining WeWork at a boutique building under construction in River North.

CA Ventures confirmed it has leased about 60,000 square feet on five floors at 448 N. LaSalle Drive, a 12-story office building it is backing in a joint venture with local developer Jaime “Jay” Javors’ Midwest Property Group.

CA Ventures will move to the new building in mid-2021 from One Prudential Plaza, where it leases a little more than 35,000 square feet on two noncontiguous floors.

The lease on floors two through six of the new building helps anchor the 172,000-square-foot property, which is going up at the corner of LaSalle and Illinois Street. Co-working provider WeWork has inked a deal for 63,000 square feet on the building’s top four floors, planning to open the space in May 2021.

CA’s new deal also showcases the development group’s continued growth. The firm, which began in 2004 as a small student housing business, has recently expanded into owning and developing senior housing, office, multifamily and industrial properties. It said last month it will also invest $12 billion over the next five years in the student housing and residential sectors.

CA now has more than 320 employees in Chicago—up from about 250 a year ago—and plans to keep hiring as it aims to grow its portfolio to $30 billion in assets by 2024 from $13 billion today, said CA Head of Capital Markets and Chief Experience Officer Katie Kazas.

“The new space will reflect our dynamic corporate culture here with a modern and energetic design,” she said. “It’s going to better accommodate our growing team.”

CA’s future home took a while to get to the starting line. Javors, who couldn’t be reached for comment, began developing the building only after a series of five lawsuits with a Michigan developer that planned a 199-room hotel on a site next door. The two sides finally made peace in November 2018.

CA Ventures is a less risky anchor tenant than shared-office giant WeWork, which has drastically slowed a leasing bonanza that turned it into one of the largest users of office space in the city, with more than 1 million square feet.

The company’s deal with Javors was in the works before WeWork pivoted away from its leasing land grab amid a scrapped IPO and thousands of jobs cuts. The LaSalle location would be WeWork’s 14th downtown and fifth in River North, sitting just a block west of one of its longest-running Chicago locations at 111 W. Illinois St.

“This location builds on our 13 existing sites in the city and provides WeWork the opportunity to deliver companies of all sizes more access to the vibrant River North neighborhood through a well-designed workspace that meets their needs,” WeWork General Manager of the Midwest Megan Dodds said in a statement.

Javors and CA Ventures are part of a pack of investors that keep betting on the strong downtown office market. Companies moved into more downtown office space last year than any year since 2007, according to real estate services company CBRE.

Available office space is especially hard to come by in River North, where vacancy in top-tier buildings today is a razor-thin 5.3 percent, CBRE data shows. That compares to more than 13 percent for all Class A buildings downtown.

Aside from Javors’ project, Chicago developer North Wells Capital is underway with an expansion of one of its nearby office buildings and aims to break ground this year on a 154,000-square-foot building at 311 W. Huron St. Developer Friedman Properties, which helped burnish River North as an office and nightlife destination, is looking for a tenant to anchor a 674,000-square-foot office building it wants to develop at 450 N. Dearborn St.

Jones Lang LaSalle brokers Chris Cassata and Craig Coupe are representing the owners of 448 N. LaSalle in leasing the building.