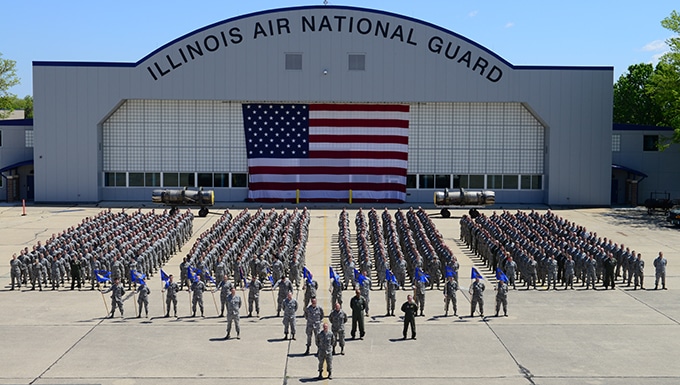 Sen. Dick Duban said in an April 18 statement that he secured the funds through Congressionally Directed Spending—more commonly known as an earmark—in the Fiscal Year 2022 Omnibus appropriations bill.

“These past two years in particular have been unprecedented for our National Guard, with mobilization levels higher and for a longer duration than at any time since World War II,” Durbin said. “Our Guard members have responded to a pandemic, natural disasters, and even to secure our U.S. Capitol building. I know a new Base Civil Engineer Complex will help ensure that our Illinois National Guard troops have the proper, modern, and safe facilities they need to meet their maintenance and preparedness needs. It will also help ensure the 183rd Wing’s future—this community’s future—for many years.”

“The new 183rd Base Civil Engineer Complex will house all its functions in close proximity for the first time,” Maj. Gen. Rich Neely, the Adjutant General of Illinois and Commander of the Illinois National Guard, said. “This will allow for better control throughout entire projects and will be more efficient in both mission and man-hours. The new complex will serve the future needs of the 183rd Wing for many years. We are grateful that Sen. Durbin and the Illinois legislative delegation recognized the importance of this project for our readiness and were able to secure funding for this project in this year’s defense budget.”

Currently, operations for the 183rd Wing are spread across seven separate buildings on sites at opposite ends of the base. All seven have high operating and maintenance costs with energy inefficient or deteriorating mechanical systems. Three of the buildings currently fail to meet Anti-Terrorism and Force Protection requirements and two are more than 50 years old and unsuited for the BCE Complex’s mission. The lack of adequate space has led to “split drills” across Wing functions for part of the year, impacting efficiency and readiness.

The new facility will consolidate existing needs into a single complex comprised of two buildings to support combat engineer training and the sustainment, maintenance, modernization, and operations of the 183rd Wing and its two primary missions. The entire complex will provide approximately 24,000 sq. ft. of space for operations.

The contract for the work is expected to be awarded later this year and the BCE Complex is expected to open in the Fall of 2024. The existing seven buildings will be demolished.