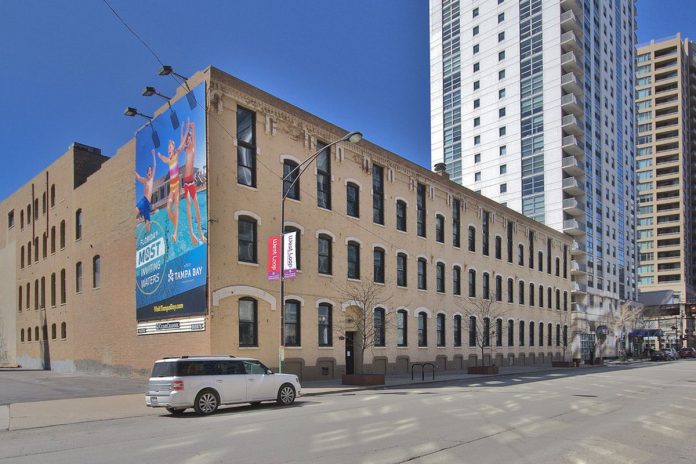 The initial Chicago building permit puts a $1.5 million value on the project.

The building was originally home to the Crane Company, the pipe and metal-parts manufacturer founded by industrialist Richard Teller Crane in 1855. At the time of construction, the building’s address was 10 N. Jefferson, situated between Randolph and Lake Streets on the Near West Side as it is today. 156 N. Jefferson was one of few buildings to survive the Chicago Fire as it was west of the burn area.

While the Crane Company, as it’s been known since the late 1880s, expanded operations in Chicago and across the country, opening outposts in places like Seattle, Texas and Boston, the factory at 156 N. Jefferson remained the company’s central offices until as late as 1955. By 1981, Crane had fully vacated the building and moved headquarters to Connecticut, where it remains today.

The early Italianate-style, timber-frame building has three-stories with a raised basement. Many of the original, character-defining features remain including brick lintels and metal hardware from wood shutters, making the building an unusual surviving example of the architectural style in industrial form. A variety of additions that were completed in the late 1800s have since been demolished, including a single-story portion in 2016 to make way for the newly opened EMME apartments.

As part of its rehabilitation for office use, Summit will complete a full interior demolition.  The scope of work also includes:

Following the core and shell work, Summit will also complete a full build-out including a basement gym and luxury office space on the first, second and third floors that will highlight the building’s historic architectural features. The work totals approximately 30,000 sq, ft, and will be completed in early 2019.