Zurich, who has held the office for more than 14 years, was dismissed by the AIA Chicago board in mid-August. Directors have been silent about the reason for his dismissal.

“When asked for an explanation, chapter president April Hughes replied, ‘Out of respect for all parties, additional details will not be shared’,” the Architectural Record (AR) reported.

Mark Schmieding of Goettsch Partners started a Change.org online petition on Aug. 25 to reverse Esposito’s dismissal. On Sept. 1, the petition had 577 signatures.

“As members of the Chicago design community, we are writing to express our utmost concern with the actions of the AIA Chicago board of directors involving the recent departure of the organization’s effective, longtime executive vice-president, Zurich Esposito,” the petition said.

The AIA Chicago board of directors made the announcement on Aug. 13. “We are focused on the future and plan to begin a national search for a permanent replacement in the coming weeks,” the board said.

The petition said: “The board’s abrupt removal of Zurich from his position demonstrates questionable and inexperienced behavior. Those actions not only failed Zurich, an invaluable advocate for all of us, but they failed the entire design community as well.”

The chapter told members by email that John Syvertsen will serve as interim executive vice-president and would lead the organization until they find a permanent replacement.

“I’m humbled by the overwhelming support of the Chicago design community I’ve served for the past 14 years,” Esposito told AR in a written statement.

In a post to Chicago Construction News’s Facebook page, Esposito wrote: “Thanks for all the great support. I wish I could say more right now. I would if I could. Best, Z.” 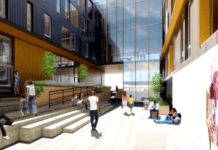