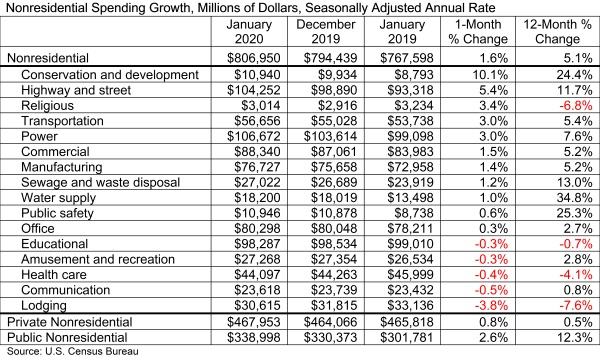 National nonresidential construction spending increased by 1.6% in January and is up 5.1% on a year-ago basis, according to an Associated Builders and Contractors analysis of data published today by the U.S. Census Bureau. On a seasonally adjusted annualized basis, spending totaled a record $806.9 billion in January.

Private nonresidential spending rose 0.8% on a monthly basis and is up 0.5% compared to the same time last year. Public nonresidential construction spending also increased, rising 2.6 percent for the month and 12.3% on a year over year basis.

“Despite all the focus on the dislocating impacts of the coronavirus, construction—a key element of the U.S. economy—continues to perform,” said ABC Chief Economist Anirban Basu.

“For the first time in history, the volume of nonresidential construction spending exceeded $800 billion on an annualized basis and now stands at an all-time high. Both public and private nonresidential construction spending expanded to start 2020, a reflection of the broader economic momentum evident over the last several years. Backlog remains healthy, according to the ABC Construction Backlog Indicator, and with the nation continuing to add jobs, there is more demand for public and private construction and additional funding resources. This is especially apparent in several infrastructure categories, in which spending growth continues to be robust due to healthier state and local government finances.

“That said, there is no question that the coronavirus has significantly compromised both global and national economic momentum over the past two to three weeks,” said Basu. “U.S. manufacturing and shipping segments have begun to soften, with significant reductions in container volume already being reported at several major U.S. ports. While the crisis is expansive enough to potentially drive the economy into recession, the question is whether the crisis is severe enough to countervail current U.S. economic momentum.

“At this time, it is unclear how coronavirus will affect materials prices,” said Basu. “Certain construction components, whether from China or elsewhere, may experience inadequate supply during the weeks ahead, and the more general impact will be decreased input prices due to lower demand. This is likely to be the case for a number of key commodities, including those related to energy.”