Four months after federal safety investigators cited his employer for failing to provide workers with fall protection at a United Parcel Service facility in Addison, a 42-year-old employee of Material Handling Systems/MHS Technical Services, fell 22 feet to his death at the same site, the US Department of Labor’s Occupational Safety and Health Administration (OSHA) reported in a news release.

OSHA says it cited  the employer for “three egregious willful violations for exposing workers to falls over 6 feet, after its investigation of the Feb. 9, 2016, fatality. OSHA also cited three repeated and three serious safety violations.”

“A man is dead because this employer decided to break the law over and over again. Before this tragedy, OSHA cited this contractor twice for exposing workers to fall hazards, including at the same site just four months earlier,” said Dr. David Michaels, assistant secretary of labor of Occupational Safety and Health.

OSHA says it cited Material Handling Systems most recently for fall protection violations in October 2015 at the same jobsite. In 2014, OSHA cited the company for similar violations after an employee suffered serious injuries in a fall in Keasby, New Jersey. The employer also received fall protection citations in 2009 in Oregon and 2012 in Florida. The company’s workers’ compensation carrier is Old Republic Insurance Company of Greensburg, PA.

Preventable falls account for nearly 40 percent of all deaths in the construction industry. Federal safety and health officials are determined to reduce the number of preventable, fall-related deaths in the construction industry. OSHA offers a Stop Falls online resource with detailed information in English and Spanish on fall protection standards. The page provides fact sheets, posters, and videos that illustrate various fall hazards and appropriate preventive measures. OSHA standards require that an effective form of fall protection be in use when workers perform construction activities 6 feet or more above the next lower level. 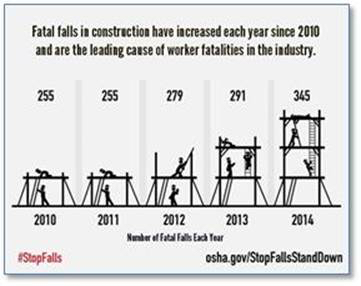 OSHA says its ongoing Fall Prevention Campaign was developed in partnership with the National Institute for Occupational Safety and Health and NIOSH’s National Occupational Research Agenda program. Begun in 2012, the campaign provides employers with lifesaving information and educational materials on how to prevent falls, provide the right equipment for workers and train employees to use fall protection equipment properly.

Material Handling Systems/MHS Technical Services has 15 business days from receipt of its citations and penalties to comply, request an informal conference with OSHA’s area director, or contest the findings before the independent Occupational Safety and Health Review Commission.