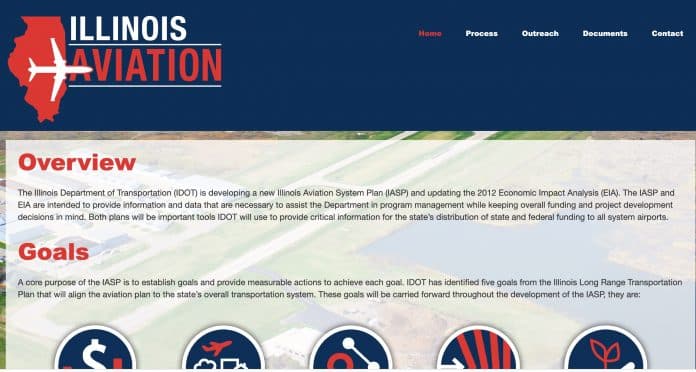 The Illinois Department of Transportation (IDOT) has released the Illinois Aviation System Plan, identifying needs of the state’s airports – the first comprehensive study of its kind in more than 25 years.

To highlight the significance of the plan and the importance of aviation to the state’s overall transportation system and economy, Gov. JB Pritzker proclaimed August as Aviation Appreciation Month in Illinois.

“Aviation is one part of a diverse, multimodal system of transportation that connects Illinois to the rest of the world and gives us a competitive edge unlike any other state,” said Illinois Transportation Secretary Omer Osman. “Under Gov. Pritzker, IDOT has been focused on strengthening this system and working with communities to invest in their transportation assets.

The new Illinois Aviation System Plan gives IDOT and our local partners a blueprint for how airports can help rebuild Illinois.”

The report analyzed 85 public-use airport facilities – 81 public and four private airports. Using IDOT’s Long-Range Transportation Plan as a guide, the Illinois Aviation System Plan focused on individual airports and the aviation system as a whole, looking at ways they can support economies throughout the state, improve quality of life and boost mobility.

Among the findings: 81% of Illinoisans live within 30 minutes of an airport with instrument flight capabilities, passenger enplanements are expected to grow by 49% – or 77.8 million – by 2039, and half of Illinois airports are less than a mile from a major road while 88% are within two miles of one.

The study, which was last done in 1994, follows last year’s release of IDOT’s Illinois Aviation Economic Impact Analysis, which found that the state’s airports annually contribute $95.5 billion to the state’s economy and support over 492,768 jobs.

IDOT is investing a total of $150 million in aviation. Last year, the governor announced a $94 million commitment to airports throughout the state, unlocking $11.5 million in local contributions for a combined investment of $105 million. The funding was the largest statewide capital investment for airports in state history.