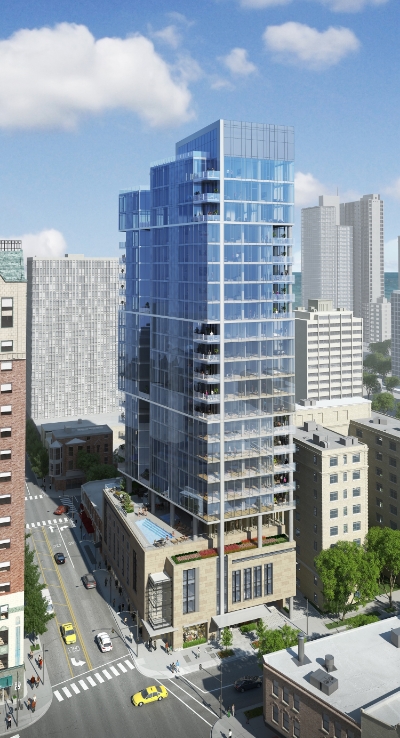 Chicago-based Convexity Properties has broken ground on 4 East Elm, a luxury condo tower in the Gold Coast neighborhood, the first of its kind there since 2007. Chicago deputy mayor Steven Koch attended the Sept. 16 event along with other officials, the developers, designers and others.

“As the first new condominium building in the Gold Coast in almost a decade, 4 East Elm is a big milestone for both the neighborhood and the downtown condominium market,” said Donald R. Wilson, chairman of Convexity Properties and DRW Holdings, reports Chicagoarchitecture.org. “We’ve had an incredible response from homebuyers, and we’re thrilled to get construction underway.”

Designed by architect Solomon Cordwell Buenz, the 27-story residential tower with the potential for up to 35 residences, stretches 335 ft. in height and features an angled-inward design in the west side, facilitating views of Mariano Park. Each floor contains up to two condos of 3,100 sq. ft. to 3,515 sq. ft. area with an option to combine them, providing 6,600 sq. ft. of space.

Gary Lee Partners is in charge of interior design.

“There has been huge pent up demand for new construction in the high-end market,” said Thaddeus Wong, co-founder of sales agency @properties. “4 East Elm raises the bar for luxury condominiums in the city and addresses the needs and tastes of upscale buyers who are looking for something both contemporary and refined.”

The condo units have been priced between $2.2 and $7.2 million each.

The tower is expected to be completed in early 2016.