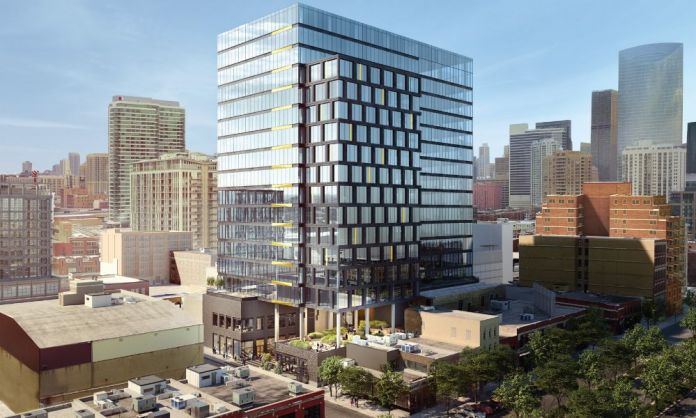 Chicago’s mayor, the local alderman and developers’ representatives gathered at 167 North Green St. in the Fulton Market area on April 20 to celebrate the groundbreaking of a 17-story office tower that will house a WeWork location, as well as other tenants.

Focus Construction, Inc. is acting as its own general contractor for the project that received a $4 million “foundation only” permit on March 7. A city news release says the work will create 250 construction job.

“In recent years, the Fulton Market District has been reborn and is now home to some of the world’s largest technology, consumer brand and professional service businesses,” outgoing mayor Rahm  Emanuel said in a statement. “By working closely with the community and Alderman Burnett, we have been able to ensure this neighborhood is a vibrant, mixed-use economy of the 21st century, while also harnessing this growth to support economic development throughout the city.”

In June, 2016 the city expanded the Downtown Zoning District to include the West Loop and Fulton Market District. This change catalyzed approximately two dozen commercial, residential and mixed-use Planned Developments, valued at more than $2.3 billion, the mayor’s office said in a statement.

“167 North Green further merchandises Fulton Market District’s core bringing more than 600,000 square feet of office space and 35,000 sq. ft. of urban retail to Green and Halsted Streets,” says Jeff Shapack, founder and CEO of Shapack Partners, which is co-developing the site with Focus. “Brands are attracted to the neighborhood because of its dynamic mix of restaurants, event venues, residential, office, hotels and retail. 167 North Green is located in the epicenter of this momentum, and provides office tenants large floor plates, unobstructed view corridors, and easy access to the City’s transit system.”

“This building is a collection of unique spaces that form a pedestrian connection through the heart of the site, uniting Halsted and Green Street pedestrians around a mid-block office-lobby,” says Tim Anderson, CEO of Focus. “This new pathway represents fresh thinking around the centuries-old concept of a mews, and the space will be the first of its kind in Chicago – attracting world-class companies and brands alike.”

“The design of the building was a true collaboration. We are very aware of the historic character of the neighborhood and the expressive building is meant to immediately evoke images of the architecture that defines Chicago,” says Grant Uhlir, regional managing principal and principal in charge at Gensler Chicago. “The varying scale and design echoes and enhances the diversity of the surrounding neighborhood, with the masonry and steel detailing paying homage to the area’s industrial roots while looking at the city’s bright future.”

WeWork is the first publicly announced tenant for 167 North Green St. with plans to occupy the 4th, 5th and 6th floors totaling approximately 140,000 sq. ft. WeWork was an early adopter in Fulton Market signing their first lease with Shapack Partners in mid-2013 and opening in the former Amity Packing building at 220 North Green St. in 2015. WeWork will have more than 200,000 sq. ft. in Fulton Market District.