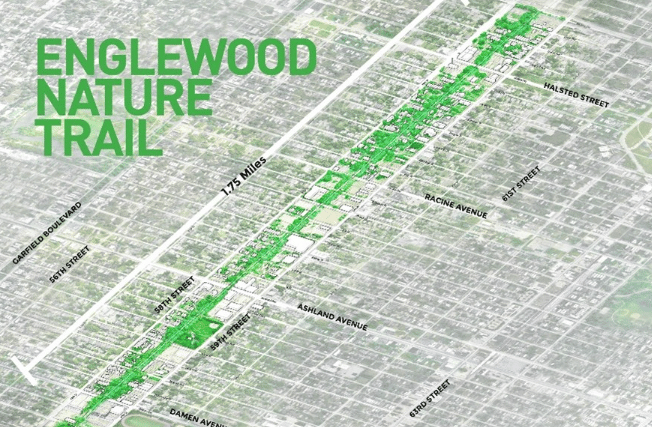 Officials recently announced $20 million to convert a 1.75-mile abandoned railway corridor into a grade-separated multiuse path for walking and biking in Englewood.

The Englewood Nature Trail has been unused since the 1960s, but also serves as the spine of an urban agriculture district that occupies adjacent land, along with other productive uses.

“This grant will provide an infusion of federal support to the Englewood community, helping create a new nature trail that will be a welcoming and enjoyable space for neighbors,” said Rep. Danny K. Davis. “I strongly supported this federal infrastructure funding and will continue to advocate for robust federal investments in Englewood and the south and west sides of Chicago.”

The RAISE grant will support detailed design and construction of the trail, which is slated to run east-west along an elevated berm, crossing 26 viaducts and ending on the east near Wallace Street and on the west near Hoyne Avenue.

Work includes nine entrances for community members to safely access the trail. The long-term goals for the trail include connecting the surrounding area with safe and inviting park space and multiuse paths.

“This equity-focused investment in the Englewood community will serve as a major catalyst for revitalization,” said Mayor Lori Lightfoot. “The Englewood Nature Trail is both a physical connector and pathway to community connectivity and opportunity. The trail, which was importantly developed as part of a community-led process, will benefit Englewood residents for years to come.”

Funding was awarded by the U.S. Department of Transportation (DOT) through the Rebuilding American Infrastructure with Sustainability and Equity (RAISE) discretionary grant program to help communities carry out infrastructure and transportation projects with significant local or regional impact.

“Englewood and West Englewood need bold catalytic development. As the network of community stakeholders and residents, we’ve been working to ensure that Englewood’s culture and identity are baked into this project and that it is a source of pride for the community,” said Anton Seals Jr., Executive Director of Grow Greater Englewood.

“We’re grateful for this federal investment and look forward to building a space where neighbors can find economic opportunities, safe and environmentally sustainable places, and access to more healthy foods.

The Englewood Nature Trail is part of a citywide vision of trails and open spaces that will contribute to a network of community-led green infrastructure projects that promote the health and well-being of Chicago residents and visitors.

The citywide vision map is intended to add 48 miles of new assets to an existing 79-mile network.

“This project closely aligns with CDOT’s goals to leverage our infrastructure to improve the health, prosperity, and connectivity of communities that have experienced years of disinvestment,” said Chicago Department of Transportation Commissioner Gia Biagi.