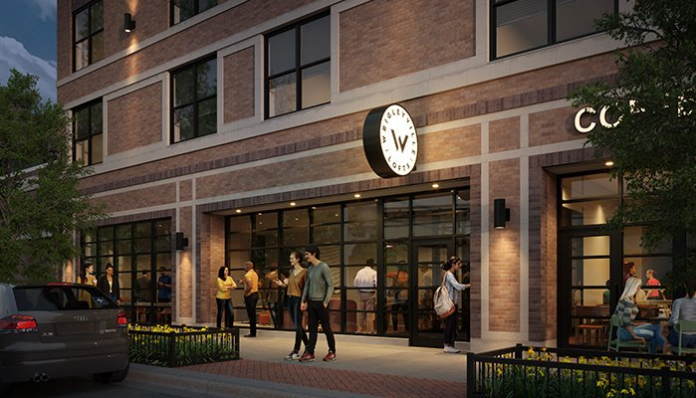 Leopardo Construction is the project’s general contractor and expects to deliver the apartments in August 2021. A city building permit issued on July 20 puts the project’s value at $26 million.

Located across the street from the Sheridan Red Line station and two and a half blocks north of Wrigley Field, the transit-oriented development replaces a single-story structure whose tenants included Ace Hardware, which is expected to fill a portion of the 13,000 square feet of retail space that will be located on the building’s lower level.

“Our development at 949 W. Dakin fills a niche in the local apartment market by bringing a boutique rental property to one of the North Side’s most popular neighborhoods,” Todd Bancroft, Draper and Kramer’s CEO, said in a statement on Aug 13.

“Wrigleyville, in particular, has seen a wave of new mixed-use projects that have transformed the area into a year-round destination for visitors and, increasingly, a full-time home for Chicagoans drawn to the area’s numerous amenities, including convenient access to the lakefront and public transit. We’re so proud to be adding our project to the area and thank Alderman James Cappleman and his staff for their tremendous support and guidance during the process of bringing this project to life.”

“The development pays homage to the neighborhood’s historic apartment buildings with a facade of dark red brick and large windows that allow for abundant natural light within residences and common areas,” said Ed Polich, Draper and Kramer’s executive vice-president of real estate. “The goal was to design a building that is appropriately scaled to the site and seamlessly integrated with the streetscape while delivering modern interiors on par with many of Chicago’s best boutique apartment buildings.”

Draper and Kramer financed the project through the Chicago regional office of the U.S. Department of Housing and Urban Development (HUD). Gershman Mortgage acted as the HUD lender in the transaction.