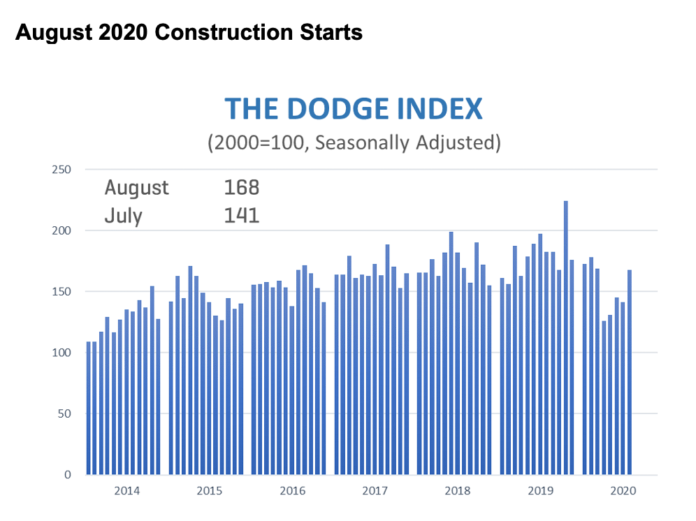 Dodge Data & Analytics says that total construction starts across the US rose 19% in August to a seasonally adjusted annual rate of $793.3 billion. Gains were seen in all three major building sectors: nonresidential building starts rose 16% and residential building climbed 12%, while nonbuilding construction jumped 40% over the month. While large projects certainly influenced the August gains, removing those projects would still have resulted in a gain for the month. 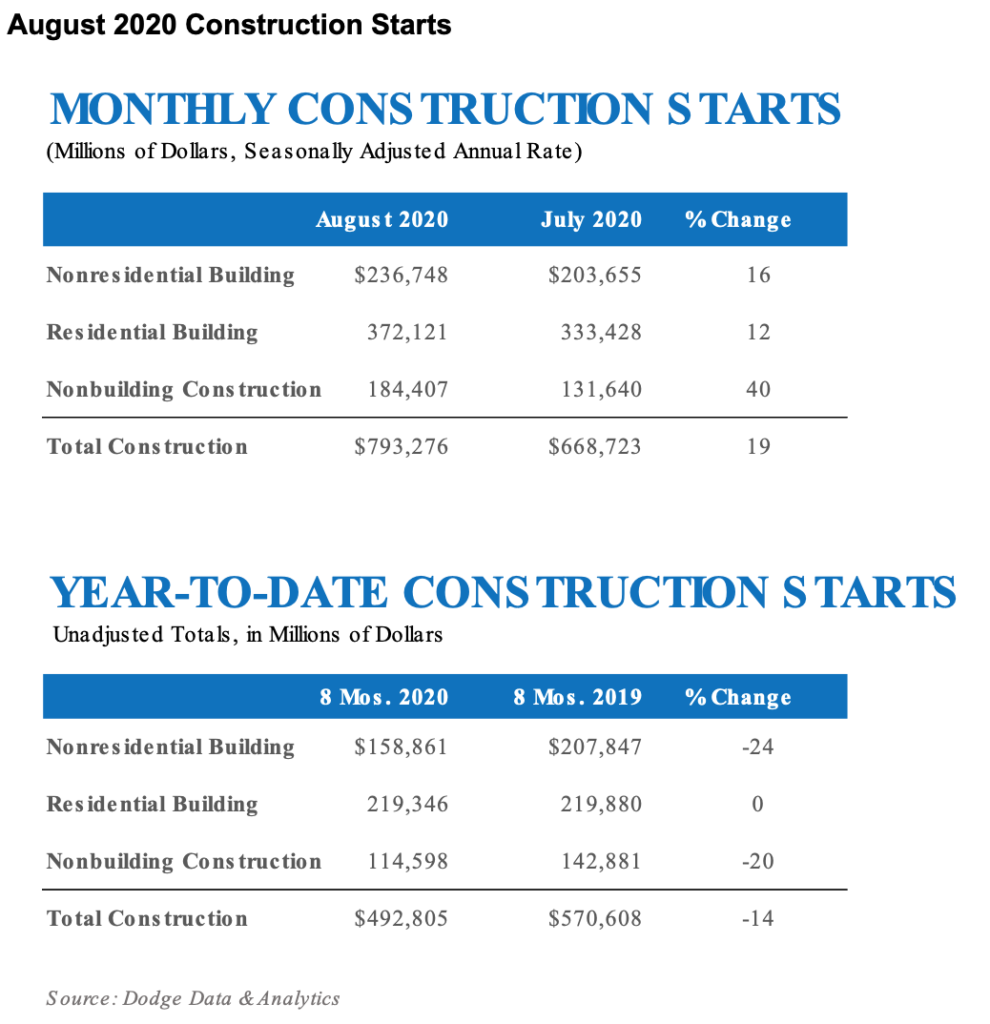 “Construction starts continue to make up ground following the nadir in activity in April,” stated Richard Branch, Chief Economist for Dodge Data & Analytics. “Residential and commercial construction are driving the gains, while the public side of building construction is proving to be a drag on growth. The regional pattern has also evened out with gains in starts seen in every region but the Midwest in August — somewhat muting the concern over the potential impact of rising COVID cases in the South and West. The nascent recovery in starts, however, will face challenges as summer turns to fall. The expiration of enhanced unemployment insurance benefits and small business loans that were provided in the CARES Act, the budget crises facing state and local governments, and the impending expiration of the FAST Act on September 30 will all have a dampening effect on starts.”
Nonbuilding construction posted a 40% gain in August to a seasonally adjusted annual rate of $184.4 billion nearly reversing the sizable decline in the previous month as two large projects pushed activity higher. Starts in the utility/gas plant more than doubled, while environmental public works posted an 89% gain and highway and bridge starts moved up 13%. Miscellaneous nonbuilding starts lost 5%.
The largest nonbuilding project to break ground in August was the $1.3 billion Wastewater Control Plant in San Francisco CA. Also starting during the month were the $888 million Dania Beach Clean Energy Center in Dania Beach FL and the $310 million new Aztec Stadium at San Diego State University in San Diego CA.
Through the first eight months of the year, total nonbuilding starts were down 20% compared to the same period in 2019. Starts in the highway and bridge category were up 1%, while the environmental public works category dropped 15%, the miscellaneous nonbuilding sector fell 34%, and the electric power/gas plant category plunged 45%. On a 12-month rolling basis, total nonbuilding starts were down 9% in the most recent year compared to the 12 months ending August 2019. Starts in the street and bridge category dipped 2%, while starts in the electric power/gas plant category were down 12%. Environmental public works starts pulled back 8% and miscellaneous public works starts dropped 21%.
Nonresidential building starts in August were also aided by large projects in the office and manufacturing sectors leading to an increase of 16% to $236.7 million. Removing these projects, however, would not have prevented an increase in nonresidential building starts. Commercial starts rose 36% and manufacturing starts soared 201%. Institutional starts, however, fell 7% despite small gains in education and healthcare.
The largest nonresidential building project started in August was the $1.0 billion Facebook Data Center (Project Woolhawk) in Gallatin TN. Also starting during the month was the $740 million Texas Instruments Fabrication Plant in Richardson TX and a $700 million mixed-use office and hotel project in Boston MA.
On a year-to-date basis, total nonresidential building starts were 24% lower than in the first eight months of 2019. Institutional building starts dropped 16%, while commercial starts slid 27% and manufacturing starts were 47% lower than a year earlier. Over the 12 months ending August 2020, total nonresidential building starts were down 13% from the 12 months ending in August 2019. Commercial starts were 16% lower, institutional starts were down 13%, and manufacturing starts slipped 1%.
Residential buildings: Through the first eight months of 2020, residential construction starts were down less than one percent versus a year earlier. Single family starts grew 4%, while multifamily starts slid 11%. For the 12 months ending in August 2020, total residential starts gained 3% with single family starts up 6% but multifamily starts down 4%.