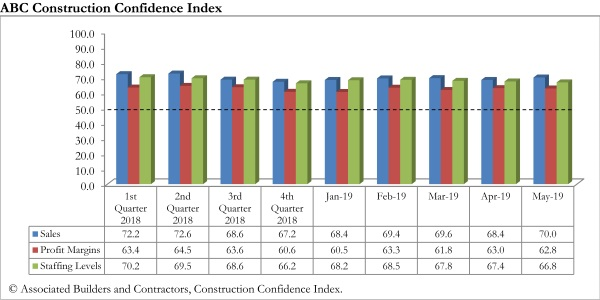 U.S. construction industry leaders remained upbeat regarding nonresidential construction’s near-term prospects in May 2019, according to the Construction Confidence Index released in mid-July by Associated Builders and Contractors (ABC). “While there continues to be considerable chatter regarding a slowing economy, the need for federal rate cuts and the damaging effects of ongoing trade disputes involving the United States, China, the European Union and India, among others, nonresidential firm leaders continue to expect further construction spending growth,” said ABC chief economist Anirban Basu. “Recent data regarding job growth and consumer spending indicate that any economic slowing to date has been mild and that the expansion is set to endure for the next few quarters.

“While profit margin expectations and staffing levels measures declined slightly in May, they remained well above the threshold level of 50,” said Basu. “More importantly, these CCI measures likely declined due to economic strength rather than weakness. Firms continue to scramble for talent in the context of an economy offering more job openings than jobseekers. As a result, staffing levels cannot rise rapidly even in the context of elevated demand for workers, and profit margins are negatively impacted by the accompanying rapid rise in compensation costs. However, far more industry leaders expect profit margins to rise than decline.

“As we reach the longest economic expansion in American history, recent construction spending data indicate that much of the momentum is coming from public projects,” said Basu. “Years of growth have helped to stabilize state and local government finances, resulting in more money available to fund transportation, water, public safety and other projects. While spending in certain private segments has been expanding less rapidly of late, this nascent weakness has been more than fully countervailed by the strength of investment in infrastructure.”