George A. Smith has been recognized by the Chicago Engineers’ Foundation (CEF) with its first Distinguished Alumni Award.

Smith launched the National Society of Black Engineers with while an undergraduate at Purdue University with his colleagues, and has continued through his career to encourage aspiring engineers.

Smith’s honor was a highlight during the 50th Anniversary Incentive Awards Dinner at the Chicago Union League Club of Chicago (ULCC) on June 13. CEF is of one of the ULCC’s three foundations.

The Distinguished Alumni Award was established by the CEF Board of Directors this
year to honor past award recipients for their professional achievements and dedication
to future engineers.

Smith received his CEF scholarship award as a Lindblom High School graduate. He attended Purdue University, pursuing a degree in electrical engineering. While at Purdue, he was one of six undergraduate students who established a first‐of‐its‐kind professional and mentoring society for minority engineering students called the Society of Black Engineers. Its mission was to help minority students adapt to the college environment, adjust to the academic rigors of engineering, and develop the professional skills required in the workplace.

In 1975, with the support of Purdue University, Professor Arthur Bond, and corporate
sponsors, the six undergraduates established the National Society of Black Engineers (NSBE). Today, NSBE has grown from six founding members to more than 17,000 members, with more than 500 chapters worldwide.

During Smith’s remarks, he recognized all of the NSBE co‐founders, including Brian Harris, who also attended the celebration. Smith emphasized to the over 200 attendees that evening that “engineering is a team sport,” an idea that he and his colleagues put into practice by helping other engineers.

Smith joined General Electric after completing his studies in electrical engineering from Purdue University. In 1978 he joined Hewlett Packard. At HP he won the President’s Club Award which was presented by the company’s founders, Bill Hewlett, and Dave Packard. In 1992 he authored two books on business improvement, which were published by the American Society for Quality when with his consulting firm.

In 2015 he retired. He is active with NSBE Jr., NSBE Professionals, Project Syncere, Men of Color Connected for Higher Achievement, PTA Men of Brookdale, and Calvary Christian Church. 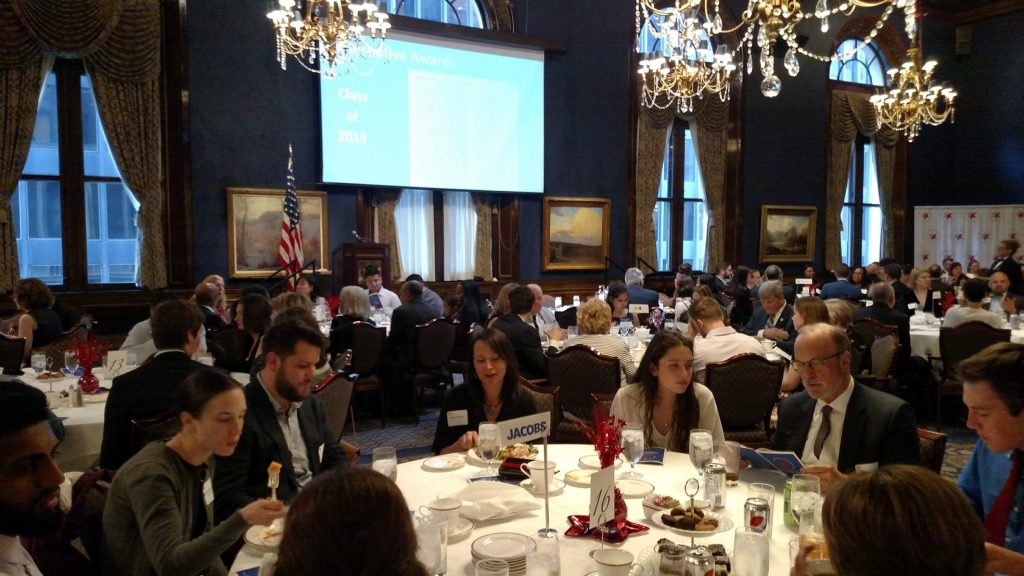 CEF also presented more than $116,000 in student awards during the evening. The Class of 2019 comprises 24 Chicago high schools. Thirty‐five percent of awardees are first‐generation college students. The average non‐weighted student GPA is 3.58. CEF has awarded over $600,000 to students over the past five years.

The CEF)of the Union League Club of Chicago (ULCC) contributes to the civic and
economic advancement of its community and country by encouraging and promoting the vital profession of engineering. CEF advances its mission primarily through its Incentive Awards, which grants educational scholarships to college‐bound high school graduates of Chicago high schools or currently enrolled undergraduate college students who are pursuing engineering degrees at an accredited four‐year university.