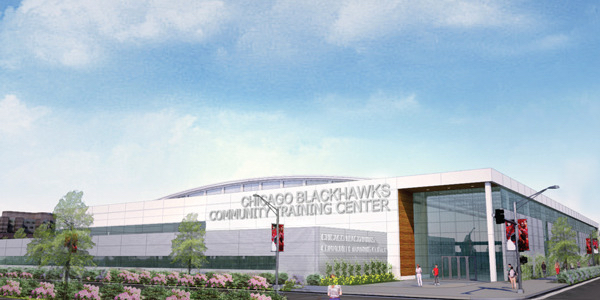 The Chicago Blackhawks will build a $50 million, 125,000-sq. ft. community training center for youth hockey development programs, recreational leagues and other events, which will also serve as the practice facility for the Blackhawks and visiting National Hockey League teams.

The land, the site of the old Malcolm X College, which will move to its new location next year, also will be used for an expanded Rush University Medical Center project. Published reports indicate the Blackhawks will use about four acres of the land for their new practice facility, while Rush will use the rest. The two will split the cost of the reported $26.7 million cost of the land accordingly.

According the figures, the Blackhawks and Rush paid the value placed on the land by the city of Chicago’s appraiser. The city has agreed to pay for the demolition and “land preparation” which will cost about $8 million, according to the reports.

The City of Chicago will be responsible for getting the site ready before work can begin. After operations move to the new Malcolm X campus, Chicago City College will transfer the property to the city in January. Following that, the Public Buildings Commission will begin demo and remediation with the idea that the purchase agreement finalized in early spring 2016, the city says in its announcement.

HOK and McHugh Construction are working to finalize the design and engineering of the ice rink. Since opening in 1994, the United Center–a join initiative owned by the Chicago Blackhawks and Chicago Bulls–has invested over $180 million in construction costs for the stadium and over $100 million in area improvements.

The Hawks are hoping to have their practice facility built and operational within two years.

The state-of-the-art facility will be located two blocks south of the United Center on a four-acre site currently housing the college, which is expected to move into its own new building north of Jackson Blvd. in January 2016. The privately funded project is being designed to contain two NHL regulation-size ice rinks, spectator seating and a dedicated oasis parking lot to serve facility guests and buses (renderings attached). In total, approximately 94 percent of the proposed facility’s utilization will serve the surrounding community, including young adult, youth and community programs that may not have the means to play otherwise.

“Hockey’s future is dictated by the ability of kids to get on the ice,” Blackhawks chairman Rocky Wirtz said. “For those in urban areas like Chicago, that’s an incredible challenge. We want to provide our community the opportunity to learn how to skate and help them develop a love and passion for the sport that has brought so much joy to Chicago and the region these past few years.”

“Soon Malcolm X will get a new 21st century campus to complement the 21st century education they provide and a site that used to serve one of Chicago’s community colleges will soon serve as a community anchor, bringing even more economic opportunity to the Near North Side,” said Mayor Emanuel. “This plan creates a permanent home for the Blackhawks to train in Chicago and allows Rush University Medical Center, which has already been a great partner with Malcolm X, to expand it campus and further support the people who live and work in this neighborhood.”

While specific plans and timetables are still being developed, Rush anticipates using the site primarily for academic purposes. Enrollment in the University’s four colleges has doubled over the last 10 years, reaching nearly 2,500 students. Rush wants to ensure that its students and faculty have an exceptional environment and campus experience, and even more innovative partnerships with community organizations and institutions.

“Since Rush University opened nearly 45 years ago, the way students are educated has changed dramatically. We need to invest in facilities and technology to support new models of education, while considering the experiential needs of current and future students and faculty,” said Dr. Larry Goodman, Rush CEO and president of Rush University.

“We deeply value Malcolm X College as an academic and community partner that has been working jointly with Rush to help educate the next generation of health care professionals and advance educational and economic opportunities for young Chicagoans,” said Rush’s Dr. Goodman

Rush University Medical Center’s campus investments over the last ten years have included a state-of-the-art new hospital that has helped it to transform care. During this time, it has added nearly 1,200 jobs on the Westside campus.

$111 million building permit issued for The Sinclair: McHugh Construction is...