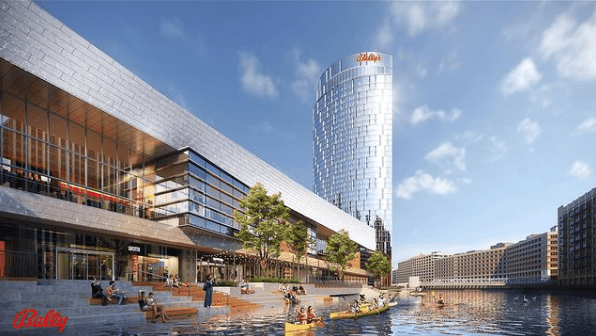 On the project website, Bally’s says they are “committed to a minority and women construction goal of 46%. The construction of Bally’s Chicago will be led by a minority-controlled, Chicago-based construction partnership, Chicago Community Builder’s Collective.”

The $1.7 billion entertainment complex by Bally’s will be Illinois’ largest casino with 4,000 gaming positions, an outdoor music venue, a 3,000-seat entertainment center, and a 500-room hotel.

“BCTC is proud to stand with Bally’s Chicago in this historic building of the first and only casino in the City of Chicago,” said CCBT President Michael Macellaio. “With this agreement, Bally’s shows that it understands the importance of good-paying jobs in our city and the dignity of our hard-working people.”

Located on the 30-acre Chicago Tribune Publishing Center at the intersection of Chicago Avenue and Halstead Street, Bally’s Chicago will transform this currently underutilized site into a major economic driver for the city.

“We appreciate that Bally’s holds itself to a higher standard when it comes to employment,” said Bob Reiter, president of the Chicago Federation of Labor. “Our mission is to strengthen the participation of underrepresented populations—with a special focus on engaging youth to consider the trades as a viable and inspiring career path—and Bally’s has proven to take that very seriously.”

Bally’s Chicago will include 3,400 slots, 170 table games, 10 food and beverage venues, a 500-room hotel tower with rooftop bar, a 3,000 seat/65,000 square foot entertainment center, a 20,000 sq. ft. exhibition, outdoor music venue, and outdoor green space including an expansive public riverwalk with a water taxi stop. The project also provides Bally’s with the exclusive right to operate a temporary casino for up to three years while the permanent casino resort is constructed.

“At Bally’s, we believe our company should reflect the community. This PLA is a demonstration of our commitment to embrace organized labor that has played such a key role in building the great city of Chicago,” said Bally’s Chairman Soo Kim. “This is the first step of a project that will be built by Chicago, for Chicago, and help the city keep its promises to the police and fire pensions.

“We are also committed to inclusivity and our partnerships with the CCBT, Chicago Federation of Labor, and Hire360 will ensure our workforce will reflect the rich diversity of the city.”

The $1.7 billion casino complex will be located on a 30-acre site currently occupied by the Chicago Tribune Publishing Center at 777 W. Chicago Ave.

Chicago Mayor Lori Light said she selected Bally’s bid over two other proposals in part because of its location in the city’s Fulton Market District.

“We are confident that Bally’s Tribune Publishing Center development will shore up the City’s pension funds, create thousands of good-paying jobs and lead to a bright financial future for our city,” Lightfoot said in a statement.