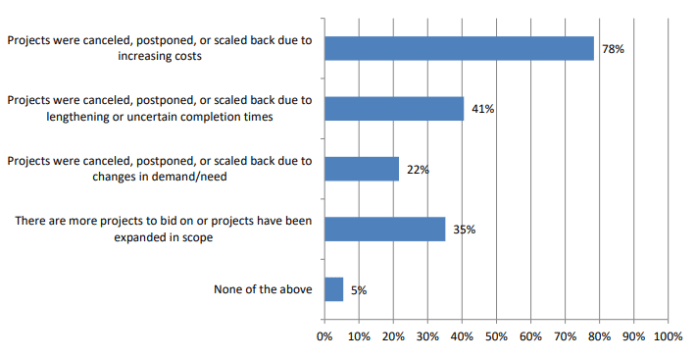 Construction workforce shortages are affecting nearly all construction firms, undermining the industry’s ability to complete projects on time and on schedule and threatening the success of new federal investments in infrastructure and manufacturing, according to the results of a workforce survey conducted by the Associated General Contractors (AGC) of America and Autodesk.

“Construction workforce shortages are severe and having a significant impact on construction firms of all types, all sizes and all labor arrangements” said Ken Simonson, the association’s chief economist. “These workforce shortages are compounding the challenges firms are having with supply chain disruptions that are inflating the cost of construction materials and making delivery schedules and product availability uncertain.”

survey the association released at the end of August, urging government officials to invest in new construction-focused education and training programs to get more people into the industry.

“Despite an overall rise in construction employment, too many openings remained unfilled due to a lack of qualified workers,” said Ken Simonson, the association’s chief economist. “As a result, many projects are being delayed or even canceled.”

The 2022 workforce survey completed in August, found 93 percent of respondents had openings for hourly craft workers. The most common reason for difficulty in filling positions, cited by 77 percent of firms, was that available candidates were not qualified to work in the industry. Two-thirds of firms reported that projects had been delayed due to shortages of employees or subcontractors.

Officials said they expect demand to increase for a variety of construction categories, particularly for infrastructure, manufacturing plants, and power and energy projects, thanks in part to new federal investments in those sectors. They warned that projects will face increasing delays and become more expensive unless the pool of workers expands.