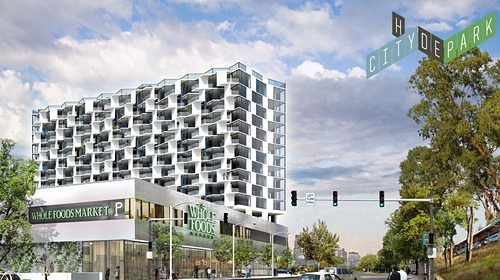 This will be the first project in Chicago to incorporate Schöck Isokorb structural thermal breaks into concrete balconies.

Curbed Chicago reports the ambitious residential and retail development has been in the works for several years.  The project, developed by Antheus Capital and Silliman Group, received its construction permit recently with completion of the 500,000 sq. ft. structure expected for 2016

Demolition of the old Village Center strip mall began late last year, and now the groundwork has been laid for the construction of the 500,000 square foot mixed-use development. Developers Antheus Capital and Silliman Group originally intended to have the project done by this year, however, City Hyde Park is now expected to be completed next year. The development received its foundation permit back in March, and the new construction permit, which allows for a 15 story structure, was just recently issued by the city last week.

Anchored by retail tenant Whole Foods, the development will feature 180 residences, of which 36 units will be reserved for affordable housing, Curbed Chicago reports.. City Hyde Park will also feature two underground levels for parking, and at the top of the structure will be a 7,700 square foot green roof. No expenses were spared on the project, which previous estimates pegged its total cost at $114 million.

The development will be joining another Studio Gang project on the University of Chicago’s campus, as well as another major mixed-use retail and residential development.

New behavioral hospital to be built in Peoria