A Jan. 4 vigil in Chicago’s Northwest side aimed to outline the value of unionized contracting for workers’ safety, while the developer has asserted that the event is part of a union “harassment” campaign.

The event coordinated by Arise Chicago commemorated the death of bricklayer Yaroslav Zhuk, who died a year earlier after falling to his death on the rental development in December 2020.

“Yaroslav Zhuk, a 55-year-old immigrant from the Ukraine, died one year ago today while working on the construction of the building behind us, where basic safety equipment and protections were not provided,” said Rev. C.J. Hawking, executive director of Arise Chicago. “Mr. Zhuk did not even have a hard hat given to him.”

An inspection report from the Occupational Safety and Health Administration (OSHA) says that Zhuk was performing “overhand bricklaying” and standing on scaffolding that did not have proper guardrails along the open sides or on the ends.

“The hazard was in plain view throughout the day from both inside and outside the jobsite,” the OSHA report says, also determining there wasn’t “adequate means of fall protection” and the employer failed to notify the agency of Zhuk’s death.

In a written statement, Bart Przyjemski, founder and CEO of Noah Properties, said his company, like “any other developer in Illinois, hires subcontractors and we rely on them to have proper training and safely equipment.

“Unfortunately, sometimes horrible accidents happen that are out of our control.” he said.

Przyjemski said he believed the vigil was really intended to pressure his company to hire union workers. That ongoing pressure campaign, he said, has led to constant harassment and “is a very sad and counterproductive way of going about earning our business,” the Sun-Times reported.

The labor federation has an ownership stake in Sun-Times media.

In the meantime, Noah Properties is going around building all these buildings like nothing happened,” Villar said. “Like (Zhuk) death doesn’t matter, but it does matter. It matters to all of us in the labor movement. It should matter to every worker in this city when a worker dies, when the death could’ve been prevented, and the company goes on their merry way and continues to profit.” 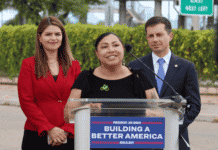 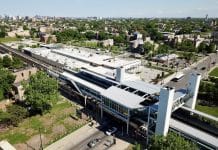