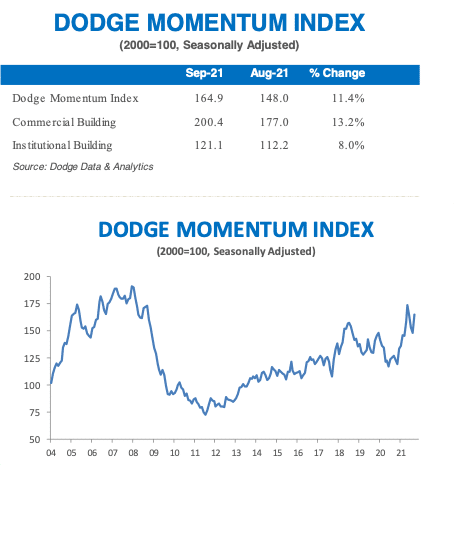 The Dodge Momentum Index gained 11% in September to 164.9 (2000=100) from the revised August reading of 148.0. The Momentum Index, issued by Dodge Construction Network, is a monthly measure of the initial report for nonresidential building projects in planning, which have been shown to lead construction spending for nonresidential buildings by a full year. The commercial planning component increased by 13% in September, while the institutional component rose 8%.

Nonresidential building projects entering planning staged a solid recovery in early 2021, as the economy began to awaken from its pandemic-induced slumber. Entering summer, those gains turned to losses as higher material prices and shortages of labor and goods weighed on the construction sector.

The strength in projects entering planning was widespread during the month, with most sectors moving higher. Excluding healthcare, which experienced a downshift in the dollar value of planning projects in recent months. On a year-over-year basis, the Momentum Index was 30% higher than September 2020; the commercial component was up 32%, while institutional planning was 25% higher.

“The gain in the Momentum Index and its components in September is certainly good news and a sign that owners and developers are looking past the current concerns over pricing, Delta, and politics and are moving forward with projects to meet demand,” Dodge said in a statement. “This does not mean there are no problems ahead for the sector. Month-to-month volatility in the data is likely to remain for some time.”