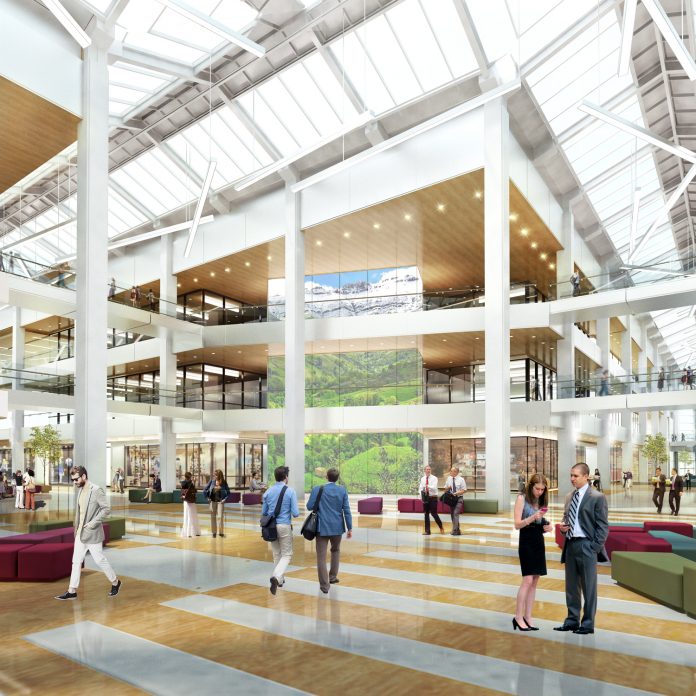 Chicago-based Wight & Company says it has been retained by Somerset Development to provide design services for Bell Works Chicagoland, a redevelopment project to transform the vacant 1.65 million-sq. ft. AT&T corporate campus in Hoffman Estates into a mixed-use complex that will include office, co-working, retail and community space.

Wight & Company will serve as the project’s “master architect,” designing its shell and core, public spaces and individual tenant spaces in collaboration with the Somerset design team that worked on the developer’s initial Bell Works project in Monmouth, N.J.

Referred to as a “metroburb,” Bell Works Chicagoland will offer an ecosystem of offices, shops, dining, event space and community resources in a livable and accessible suburban location. The AT&T headquarters, built as the Ameritech Center in 1990, was originally designed by Wight & Company principal Dirk Lohan, formerly with Lohan Associates.

“Somerset Development’s success with the metroburb concept demonstrates the possibilities that exist for many owners to repurpose these expansive suburban corporate campuses that have been vacated in recent years,” said Lohan. “This project offers an incredible opportunity to reimagine a magnificent building and location for the next generation. On a personal level, it is a gift to be able to not just revisit, but reimagine a structure I designed in an era when suburban development was approached quite differently.”

In transitioning a building meant for a single-tenant to multi-tenant and mixed-use, Wight & Company will retain some of the development’s most distinguishing features yet position them in new ways. For example, the 67,000-sq. ft. solarium that served as the AT&T food service area on the building’s top level will be transformed into an event center, overlooking the property’s landscaped grounds. And the glass-roofed corridors that connected the building’s wings to a central atrium will be populated with restaurants, retail and services for Bell Works tenants as well as the public.

In addition to Bell Works Chicagoland’s 1.1-million sq. ft. of office and 60,000 sq. ft. of retail and restaurants, Somerset plans to include an 80,000-sq. ft. conference center and 29,000-sq. ft.  fitness center. Future plans for the project will eventually incorporate separate retail, residential and hospitality space on the surrounding property.

“In planning the implementation of the metroburb concept, we recognized the advantages of working with a firm that has a track record of designing innovative ground-up developments in addition to adaptive reuse initiatives,” said Ralph Zucker, president of Somerset Development.

“It’s important that our project partners, including Wight & Company, Alex Gorlin Architects and NPZ Style + Decor, share our vision for the future of this property and the future of work at large. Wight & Company recognized the opportunity to create a true regional centerpiece in Bell Works Chicagoland, and we’re excited to have them aboard.”