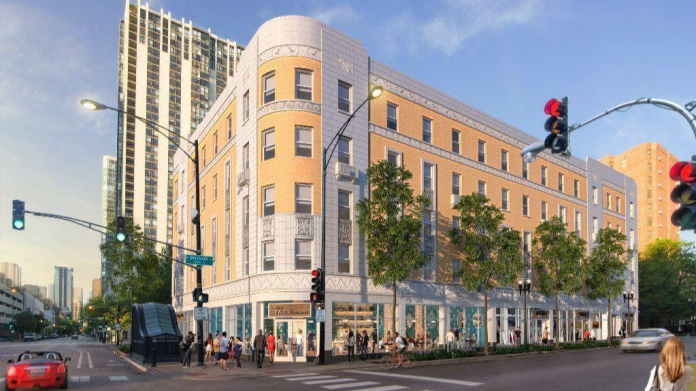 The NHP Foundation (NHPF) says it has finalized $53 million in financing to renovate the 90-year old Mark Twain Hotel, a mixed use Single Room Occupancy (SRO) property the organization acquired in 2016.

The property at the intersection of North Clark and West Division Streets will contain 148 studio apartments and seven retail stores once the year long renovation is complete.

The development team includes Weese Langley Weese Architects Ltd. and Linn-Mathes, Inc. Construction began immediately after closing and it is expected to be complete by the end of 2019.

NHPF acquired the property as part of Chicago’s SRO and Residential Hotel Preservation Ordinance of 2014, which requires sellers to notify the city of their intention to sell and incentivizes them to work with buyers who agree to maintain such properties as affordable housing. The SRO preservation initiative has preserved 11 buildings consisting of approximately 1,500 units to date.

“We introduced the ordinance to preserve SRO’s in expensive neighborhoods and ensure that owners would sell to the most qualified owner, not simply the highest bidder,” said 27th Ward Ald. Walter Burnett Jr., who championed the ordinance. “We are seeing the fruits of these labors with projects like The Mark Twain where the property will be beautifully preserved and kept affordable.”

The Mark Twain Hotel was originally built in 1932 as a residential hotel. It was added to the National Register of Historic Places in 2017.

The building is across from The Sinclair, a new luxury residential tower with a Jewel/Osco supermarket completed in 2017. The Red Line station beneath the building underwent a complete $50 million renovation in September 2015, including installation of elevators and escalators, a new entrance at LaSalle and Division, and a new 8,000 sq. ft. mezzanine.

NHPF’s renovation plans call for the addition of private kitchenettes, new elevator, new plumbing and electrical work, a roof deck, making the property handicap accessible, and restoration of the building’s vintage facade and common areas. The renovation also calls for a planned upgrade to the building’s approximate 9,000 sq. ft. ground floor retail space with several spaces under contract to deliver fast casual food and sale of goods, including the return of Mr. Gyro’s, a neighborhood favorite.

“This marks another important milestone in Chicago’s efforts to create and preserve affordable housing units for its residents,” Chicago Mayor Rahm Emanuel said in a statement. “Through its partnerships with the city, the Mark Twain has helped support the diversity, character and affordability of the Near North Side since the 1930s. I want to congratulate NHPF for ensuring this building will fulfill its historic role in the community for many years to come.”

Upon completion, the residential units will be income restricted and remain affordable to existing tenants who qualify to return and to future low-income residents. “For our returning residents, their quality of life will greatly improve,” said NHPF CEO Richard Burns. “We will deliver durable apartment homes, new community areas, and in-house resident services; all for the long term.” Residents have been temporarily relocated off-site.