PREMIER Design + Build Group has launched Phase III of a new 225-acre business park in Waukegan this month. At an Oct. 15 groundbreaking ceremony with client Bridge Development Partners, LLC, the project team kicked off the next phase, which will add four new buildings totaling 918,972 sq. ft. to the Bridge Point North master-planned campus. PREMIER is managing design + build services for each of the Phase III buildings.

Bridge Point North is a modern, Class A industrial business park designed for tenants seeking space for corporate headquarters, high-tech manufacturing, distribution/warehouse operations, and life sciences. Bridge Point North Phase I was completed in 2017; Phase II was completed earlier this year. Current tenants include Amazon, Medline and Cardinal Health. Bridge Point North is located near I-94 and Routes 137 and 41. The site is midway between Chicago’s O’Hare International Airport and Milwaukee Mitchell International Airport. 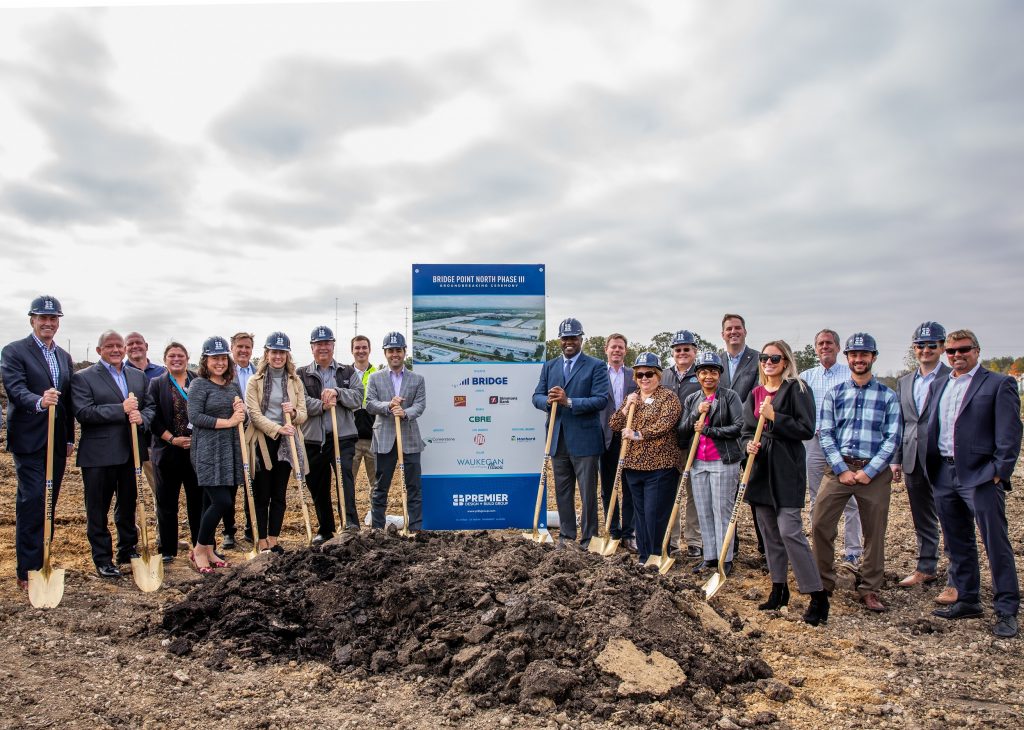 Each of the Phase III precast and glass buildings will feature 32’ clear height ceilings with the exception of building IX, which will offer 36’ clear heights. The buildings will range in size from 100,314 to 500,800 sq. ft. Sustainable elements include T-5 LED motion sensor-controlled lighting. Buildings VI-VIII will deliver in early Summer 2020, and Building IX will deliver in Fall 2020.

Nick Siegel, vice-president at Bridge said: “Since initial construction began in 2015, Bridge Point North has established itself as a state-of-the-art business park that has strong appeal to a range of tenants, evidenced by the impressive tenant roster of the first two phases of construction. We’re excited to be bringing more of this high-demand space to Lake County.”

“PREMIER is proud to have been involved in the design and construction of this impressive development since the early phases,” said Michael Long, PREMIER’s senior vice-president and Midwest market leader. “We’re excited to be starting work on the next chapter, which will add nearly 1 million square feet of Class A space in Waukegan.”

Waukegan Mayor Sam Cunningham voiced his support for Bridge Point North during the groundbreaking ceremony: “We are now the example of property revitalization, with one of the premier developments in the Midwest. As the mayor of the city of Waukegan, I thank you for having the trust and foresight to know these things can happen in our urban/suburban community.”

CBRE Group, Inc. is the listing agent for the entire Bridge Point North campus. CIBC Bank and Simmons Banks are the lenders.