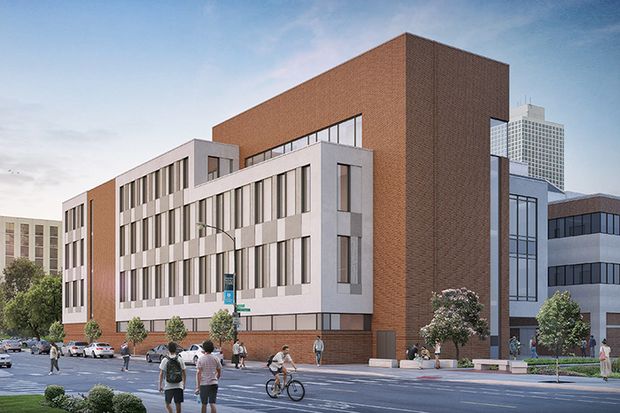 Moody Bible Institute will move forward later this month with its plans for a new global media centre when it breaks ground for the four-story, 50,000 sq. ft. facility, designed by Shive-Hattery on November 18.

Named the Chapman Centre, in honor of a donation from author Gary G. Chapman, a Moody alumnus, the new building will replace a lawn and footpath just west of Moody’s existing Sweeter Center and will “serve as a media center, consolidating Moody Radio and Moody Publishers under the same roof.”

Moody’s website says the two groups will “reside and collaborate in this state of the art space in the areas of digital publishing, multimedia production and Internet technology. It will also serve as a hands-on laboratory for training Moody’s Communications students in a real-world media environment.”

Strategically located to provide access to the entrances to the adjacent buildings, the $24 million project ($21 million for construction and $3 million to be spent on outfitting the spaces) will include a main floor Chapman Ministry Exhibit, which will be open to the public. State of the art infrastructure will “support the changing demands of digital media.”

Moody says the “distinctive, modern architectural design reflects the building’s purpose as a global media centre” and will provide “a modern and efficient place for professionals and students to work together as they impact the world for Christ.”