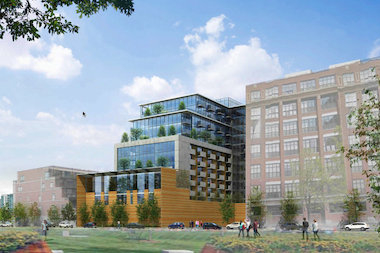 Wicker Park-based LG Development Group has proposed to develop a 13-story apartment tower on an existing parking lot at 111 S. Peoria St., across the street from Mary Bartelme Park.

The tower will have studio, two-bedroom and one-bedroom apartments of 400 to 1,230 sq. ft. of area totaling 205 units, as well as 144 parking spaces. LG earlier planned a taller building with more micro-studio apartments but revised the plan due to feedback from neighborhood groups, according to Armando Chacon, president of the West Central Association Chamber of Commerce, reports Dnainfo.com.

A neighbor group that includes James Dore, head of West Loop Residents Association, has opposed the project and appointed an attorney for their cause. Their reasons, however, remain unknown.

“We are still in discussions regarding that project,” said Martha Goldstein, executive director of the West Loop Community Organization.