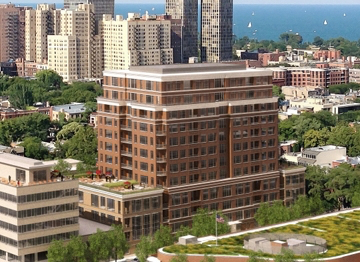 James McHugh Construction has started work to convert a former Lincoln Park Hospital building into condos, with a building permit issued with an estimated $350,000 million cost.
While the owner on the building permit documentation is listed as Geneva Webster LLC, Chicago Real Estate Daily reports Sandz Development Co. is developing the site.

This summer a venture led by the Chicago-based developer will start marketing the final — and biggest — phase of the 600,000-sq. ft. Webster Square project at Lincoln and Webster avenues, aiming to capitalize on resurgent condo demand and lack of competition from other builders in the wealthy neighborhood.

Sandz already has converted two former hospital buildings into apartments and a grocery store. Now, they plan to covert a 12-story brick structure on the campus into about 100 condos. It would be the largest condo project conceived since the crash in Lincoln Park, a traditionally strong housing market where big sites rarely come available to developers.

“This is the natural progression,” said Sandz partner David Goldman. “It’s been a nice milestone for us and it’s got us feeling good about the overall program at Webster Square.”