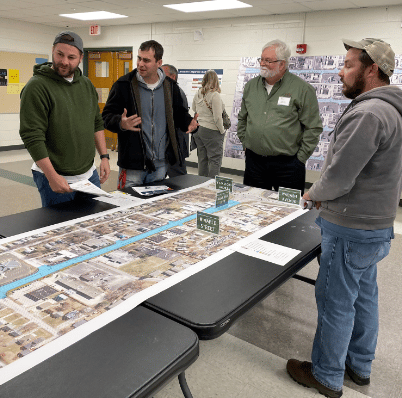 Illinois Department of Transportation (IDOT) has unveiled an alternative preferred design for upgrades to a portion of the MacArthur Boulevard Corridor in Springfield.

The road was originally constructed in 1919 with a 20-foot width and was resurfaced with brick in 1932. At that time, it was known as West Grand and renamed MacArthur Boulevard during World War II. The road was widened to four lanes in 1961 and is in need of repair and upgrades to accommodate current traffic volumes and nonmotorized transportation.

Alternative 3 includes two lanes of traffic between South Grand and Wabash/Stanford avenues with an 11-foot-wide center-left turn lane, five-foot-wide sidewalk on the eastern part of the road, and eight-foot-wide, two-way shared-use path on the west side of the road. It also has a buffer for traffic and a 25-inch curb and gutter.

During an open house in November, IDOT staff said the preferred alternative has less of an impact on businesses and existing infrastructure.

IDOT is currently in the engineering phase of its three-part plan to complete the project – collecting data and mocking up plans.

This project is following IDOT’s Context Sensitive Solutions (CSS) policy, a collaborative approach that involves all stakeholders to gather and consider input on the project from all interested stakeholders, and to encourage design flexibility to incorporate environmental and community values, as well as meet transportation objectives.